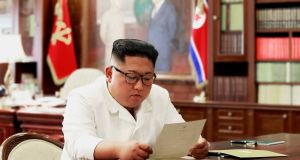 US president Donald Trump has sent a letter to North Korean leader Kim Jong–un, who described its contents as “excellent”.

The Korean Central News Agency reports Mr Kim “said with satisfaction that the letter is of excellent content”.

It added: “Appreciating the political judging faculty and extraordinary courage of President Trump, Kim Jong Un said that he would seriously contemplate the interesting content.”

Nuclear talks between the US and North Korea broke down after the failed summit between Mr Kim and Mr Trump in February in Vietnam.

The US is demanding that North Korea abandons its nuclear weapons entirely before international sanctions are lifted.

North Korea is seeking a step-by-step approach in which moves towards denuclearisation are matched by concessions from the US, notably a relaxation of the sanctions.

The two leaders exchanged letters in 2018 after a summit in Singapore to discuss the nuclear issue.

In September 2018, Mr Trump told a cheering crowd at a campaign rally in West Virginia that Mr Kim “wrote me beautiful letters and they’re great letters. We fell in love”. – AP