Seven dead and 21 injured after building collapses in Cambodia

Seven-storey building under construction fell down in Sihanoukville 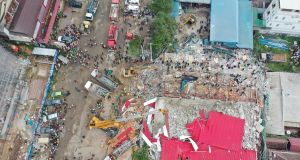 An overhead view of a collapsed under-construction building in Sihanoukville. Photograph: Stringer/Reuters

A seven-storey building under construction has collapsed in Cambodia’s coastal city of Sihanoukville, killing seven workers and injuring 18, authorities said.

Provincial authorities said in a statement that four Chinese nationals involved in the construction have been detained while an investigation into the collapse is carried out.

Rescue work at the site was under way to find out if any more workers were trapped in the rubble, said the city police chief Major Thul Phorsda.

The Ministry of Labour and Vocational Training said that 30 workers were at the site when the building tumbled at around 4am.

Police and provincial authorities said they were unsure how many people were working on the building.

It was not immediately clear what caused the collapse.

Yun Min, the governor of Preah Sihanouk province, said by telephone that the building was owned by a Chinese investor who leased land for a condominium — one of many Chinese projects in the thriving beach resort.

Information Minister Khieu Kanharith said on his official Facebook page that the Cambodian workers were using the unfinished structure as their sleeping quarters.

The building was about 70 per cent to 80 per cent completed. – AP