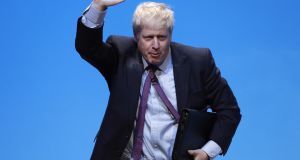 Boris Johnson, Conservative Party leadership candidate, waves as he arrives to speak during a hustings event in Birmingham, on Saturday. Photograph: Bloomberg

Boris Johnson is under pressure from leading Tories to explain why police were called to his home after a row with his partner, as the issue threatens to derail his campaign to become the next British prime minister.

Foreign secretary Jeremy Hunt took a swipe at his competitor for Downing Street after Mr Johnson repeatedly refused to reveal what led to the police involvement in the incident in the early hours of Friday. Mr Hunt told Sky News: “I think someone who wants to be prime minister should answer questions on everything.

“But I’m not going to comment on issues of character because . . . I am sure you and I have got things, that, you know, we would be embarrassed if they came out.

“I just think it’s irrelevant given the gravity of the situation. I am not going to comment on Boris’s personal life. That’s for others to make their judgments on.” Asked if he agreed with claims that Mr Johnson’s private life made him a security risk, Mr Hunt said: “I would never make those comments myself.”

He called on his supporters not to make such claims either as he does not “think the British public want a debate about people’s private life”. Mr Hunt added: “They want a debate about the constitutional crisis that we are in at the moment with Brexit.”

The foreign secretary insisted his predecessor in the cabinet role was trying to avoid scrutiny in the battle for Number 10. “What Boris needs to do is engage properly in this leadership debate.

“This is an audition to be the prime minister of the United Kingdom and Boris needs to show that he is prepared to answer difficult questions.”

Liam Fox, the international trade secretary, also said the frontrunner to succeed Theresa May should speak out about the late-night altercation that was witnessed by several neighbours and first disclosed by the Guardian on Friday.

The development follows two days of negative headlines that have damaged Johnson’s chances of beating Mr Hunt in the race to become leader of the Conservative Party.

Under close questioning at the first hustings before Tory party members on Saturday, Mr Johnson refused to comment on the argument with his partner Carrie Symonds, a former Conservative Party head of press, at their home in the early hours of Friday.

Mr Fox, a supporter of Mr Hunt, said on Sunday it was time for Mr Johnson to explain the incident openly so that the contest can get away from “these distractions” and return to the two candidates’ plans as prime minister.

“It’s always easier to give an explanation, then we can discuss the policies,” he told the BBC’s Andrew Marr Show on Sunday.

Former foreign secretary Sir Malcolm Rifkind also urged Mr Johnson to explain what happened or arouse suspicions that he was hiding something.

He told BBC Radio 5 Live: “If you are a candidate to be prime minister and the police have been called to your house – fairly or unfairly – the fact is there was a police visit. You don’t just say ‘no comment’. That implies you may have something you don’t want to disclose.

“It was a lack of judgment to refuse to even make a short comment. All he could have said, quite reasonably, would have been that in all relationships there are occasionally outbursts of anger and disagreement.”

Police confirmed they were called to the couple’s south London flat after a loud argument was heard by neighbours, who said they heard slamming and banging, adding that at one point Ms Symonds could be heard telling Johnson to “get off me” and “get out of my flat”.

A poll conducted on Saturday showed support for Mr Johnson had fallen sharply following the incident.

His eight-point lead earlier in the week had fallen to three points behind Mr Hunt by Saturday morning.

Among Tory voters, when asked who would make the best prime minister, Johnson’s lead had slumped from 27 per cent to 11 per cent in the same period, according to Survation, which carried out the polls for the Mail on Sunday.

Andrew Gwynne, the shadow secretary of state for communities and local government, said Mr Johnson was “completely unsuitable” to be prime minister after police were called to the flat.

He told Sky News’s Sophy Ridge on Sunday: “In one sense, of course, it is a private matter, but when you’re running for public office, when you are wanting to be the prime minister of the UK, then these matters are in the public interest.

The neighbour who contacted the police, Tom Penn (30), issued a statement saying he wanted to put the record straight on his reasons for recording the row and calling 999.

Mr Penn, a playwright, said he acted only as a last resort and that he was speaking out because he was concerned by the “bizarre and fictitious allegations” made about him and his wife.

Mr Penn said: “In the early hours of Friday morning, I answered a phone call from a takeaway food delivery driver. At the same time, I heard what sounded like shouting coming from the street. I went downstairs, on the phone to the driver, and collected my food.

“On the way back into my flat, it became clear that the shouting was coming from a neighbour’s flat. It was loud enough and angry enough that I felt frightened and concerned for the welfare of those involved, so I went inside my own home, closed the door, and pressed record on the voice memos app on my phone.

“After a loud scream and banging, followed by silence, I ran upstairs, and with my wife agreed we should check on our neighbours. I knocked three times at their front door, but there was no response. I went back upstairs into my flat, and we agreed that we should call the police.”

Another neighbour, Fatimah, a nursery teacher who lives with her husband and four-year-old son in the top flat next door, told the London Times she could hear “shouting and screaming – I’ve never heard anything like it”. - Guardian/PA