The woman was terminally ill so her husband held a gun to her head, police say 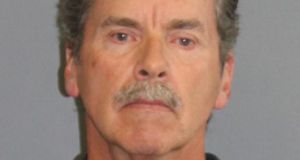 Kevin Conners is charged with manslaughter in the death of his wife, Lori Conners, who died from a gunshot wound to the head. Photograph: Connecticut State Police via The New York Times

The warrant for the man’s arrest told a wrenching story. His wife was terminally ill, going through chemotherapy treatments for cancer and struggling with Lyme disease, her pain and anguish increasing to such a degree that they began to search for ways to end her life.

The two talked about taking razor blades to her wrists or getting the tranquilising drug Klonopin. They debated going to Vermont in the US, where the terminally ill can legally be prescribed medication to die, but she wasn’t a resident. Last summer, she tried using the sleep drug Ambien and whiskey, but did not overdose.

Finally, the police call came. Lori Conners (61), was dead of a gunshot wound to the head. On Thursday, her husband, Kevin Conners, turned himself in, was arrested and posted $50,000 (€43,876) bail, according to the authorities. The state police investigated the death of Lori for several months before charging Kevin with manslaughter.

Kevin had initially told the police on the night of his wife’s death in September that he was roused from sleep by the sound of a gunshot in their home in a wooded swath of Westbrook, in the US state of Connecticut, according to the warrant. But when police questioned the truthfulness of his account, Kevin (65), admitted that he had held the gun. He could not bear to see his wife of 42 years continue to suffer, he said, and she had been fearful she would flinch and botch the job.

Kevin, a retired lieutenant for the state department of corrections, appeared in court on Friday morning. (A call to the number listed for the couple’s home address was not answered on Thursday night.) After Kevin appeared in court on Friday, his lawyer, Raymond Rigat, described him as a “kind, compassionate, loving” husband, father and grandfather and said his wife was “suffering horribly”.

The episode comes as a number of US states weigh legislation to allow physicians to aid terminally ill patients to die in certain settings. Several states, including California, Vermont and Oregon, as well as the District of Columbia, have already passed aid-in-dying laws. Such a Bill has come before state legislators in Connecticut several times since 2013, but has repeatedly failed to pass, most recently this spring.

Kevin and Lori Conners had four children and six grandchildren. She was a homemaker and a devout Christian, her husband told police. Lori had been diagnosed with ovarian cancer the winter before her death, and it had spread to her liver, colon and abdomen, the Hartford Courant reported. An obituary said she loved gardening and architecture, and was known for her compassion – “sponsoring needy children, feeding and helping locals in need, doting on her grandchildren (and of course, letting them win all the card games).”

When the police call came in, Kevin was crying, according to the warrant. He told investigators he was woken by the gunshot in his wife’s bedroom and found her bleeding and watched her die. The couple slept apart, he said, because he snored. Kevin told investigators that his wife had Lyme disease for close to two decades and that its symptoms were conflicting with chemotherapy and making her very sick. She was “constantly” writing suicide letters, he told investigators, who found 13 such letters in the couple’s home, including three on her nightstand. When she was found, Lori “didn’t have much head hair,” the warrant noted, because of chemotherapy treatments.

But she was lying on her bed with one arm outstretched and the other on her chest, her hand curled in a fist, according to the warrant. A silver .38 calibre revolver lay on a pillow, but she was not touching it. There was no gunshot residue on her fingers.

Kevin had washed his hands and changed his shoes, and in the closet, investigators found a pair of sneakers with “a visible wet red-coloured bloodlike substance” on them. After he broke down and told officers that he “wasn’t being totally truthful,” he said that “he loved his wife very much and couldn’t watch her suffer”. He and his wife had researched ways to help her die, searching a “Death With Dignity” website for states that allow physician-assisted suicide.

They had hoped, he said, that investigators would assume it was a straightforward suicide. According to the warrant, his laptop revealed Google searches for the “Death with Dignity” as well as for “Klonopin” and “Murder-Suicide”. Connecticut’s aid-in-dying Bill would permit terminally ill patients with six months to live to receive prescriptions for a drug or combination of drugs that would end their life. It has become a thorny issue, giving rise to long and emotional hearings over the past several years.

Lori's obituary said: “Her final days were spent with her loved ones by her side, and as anyone who knows her would expect, this is all she wanted, not only during this time but throughout her entire life.” It adds: “She will be dearly missed, and we will all grieve the loss for a long time. We can, however, find solace in knowing her suffering is no more.” - New York Times