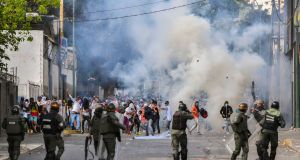 Riot police clash with opposition demonstrators during a protest against the government of President Nicolás Maduro on Wednesday. Photograph: Yuri Cortez/AFP/Getty Images

Senior figures in the Venezuelan military came out in support of President Nicolás Maduro on Thursday, a day after the US said it no longer recognised him as the country’s leader and backed the opposition’s Juan Guaidó instead.

Vladimir Padrino López, a general and Venezuela’s defence minister, said Mr Maduro was the country’s rightful leader and condemned what he described as Mr Guaidó’s unlawful attempt to wrest power from the socialist regime.

“We are here to avoid ... a conflict between Venezuelans,” he said. “It is not a civil war that will solve Venezuela’s problems. It is dialogue.”

In a video posted on social media and broadcast on state TV, other senior military figures also backed Mr Maduro, who has led the country since 2013 but has come under intense pressure to resign since he started his second term as president this month after an election victory widely dismissed as a fraud.

“The people of Venezuela, in a free and secret vote, elected Nicolás Maduro Moros as president,” said Maj Gen Manuel Bernal Martínez, head of the military in the west of the country.

Backed by dozens of soldiers in olive green fatigues, other generals stepped forward and added their expressions of support for Mr Maduro.

The declarations came after a day of high drama in which, one by one, many countries across the Americas turned their backs on Mr Maduro and embraced Mr Guaidó, the head of the National Assembly, or Congress – regarded widely as the last bastion of democracy in the country.

US president Donald Trump hailed Mr Guaidó as the nation’s leader, and other countries – including Brazil, Argentina and Colombia – followed suit in what appeared to be a carefully synchronised move to undermine Mr Maduro.

The battle for power of the Venezuelan executive has split the world, however. Russia, China, Turkey and Mexico still regard Mr Maduro as president.

Vladimir Putin, Russia’s president, expressed support for Mr Maduro in a phone call on Thursday, the Kremlin said, as well as his backing for a “peaceful dialogue”.

I hope that all of Europe will unite in support of democratic forces in #Venezuela. Unlike Maduro, the parliamentary assembly, including Juan Guaido have a democratic mandate from Venezuelan citizens.

The EU stopped short of explicitly supporting Mr Guaidó but called for elections in Venezuela and backed the national assembly that he heads as the “elected institution whose powers need to be restored and respected”.

Federica Mogherini, EU foreign policy chief, said: “On January 23rd, the people of Venezuela have massively called for democracy and the possibility to freely determine their own destiny. The EU strongly calls for the start of an immediate political process leading to free and credible elections, in conformity with the constitutional order.”

Donald Tusk, European Council president, struck a similar note with a tweeted call for “all of Europe [to] unite in support of democratic forces in #Venezuela”.  He added: “Unlike Maduro, the parliamentary assembly, including Juan Guaidó have a democratic mandate from Venezuelan citizens.”

French president Emmanuel Macron wrote in a Twitter post: “After Nicolás Maduro’s illegitimate election in May 2018, Europe supports the restoration of democracy. Acclaim the bravery of hundreds of thousands of Venezuelans who march for their freedom.”

The UK said Mr Maduro was “not the legitimate leader of Venezuela” and joined Washington in backing his rival. “The United Kingdom believes Juan Guaidó is the right person to take Venezuela forward,” said Jeremy Hunt, UK foreign secretary. “We are supporting the US, Canada, Brazil and Argentina to make that happen.”

Venezuela has become increasingly militarised since Mr Maduro’s predecessor, Hugo Chávez, a former paratrooper, came to power 20 years ago, and the military’s support could tip the balance of power between the two rival presidents.

While the top brass of the military appears to be steadfast in its support for Mr Maduro, there are increasing signs of discontent among the lower ranks, where soldiers suffer the same deprivations as ordinary citizens. Earlier this week, the government quashed a rebellion by 27 members of the Bolivarian national guard – the military police force.

“It took the military several hours to express their support for Maduro after Guaidó designated himself president but they eventually came out with clear, if not exactly effusive, support,” said David Smilde, an expert on Venezuela at Tulane University in the US.

“I think those hours after Guaidó’s self-proclamation were the key test and Maduro got past that hump. However, his support from the military is clearly not airtight and that will be the key in the days and weeks ahead.”

The Maduro government has warned the US of repercussions, saying that “things could happen” at its embassy in Caracas. Mr Maduro has given staff there 72 hours to leave the country, accusing the US of trying to foment a coup.

On Thursday, Mr Maduro said he had decided to close the Venezuelan embassy and all consulates in the US.

Mike Pompeo, the US secretary of state, said Washington no longer recognised the Maduro regime and would not withdraw its staff. “The United States will take appropriate actions to hold accountable anyone who endangers the safety and security of our mission and its personnel,” he said.

In remarks on Thursday to the Organisation of American States, a diplomatic body comprising nearly all the countries in the Americas, Mr Pompeo again denounced Mr Maduro: “His regime is morally bankrupt, it is economically incompetent, and it is profoundly corrupt. It is undemocratic to the core.”

Foro Penal (Penal Forum), a Venezuelan non-governmental organisation, said seven people have died this week in clashes between anti-government protesters and the security forces, and more than 200 were injured. Local media put the death toll as high as 16.

After Wednesday’s drama, the streets of Caracas were relatively calm on Thursday, and Mr Guaidó kept a low profile.

“We’ll have to wait and see what happens. A lot of people are confused, and some are saying he’s already gone into hiding,” said 42-year-old Victor Oropeza in the Caracas neighbourhood of La Yaguara.

On Wednesday, prices for Venezuela’s bonds jumped to their highest levels in seven months on hope that regime change might be near in the country, which under Mr Maduro has suffered one of the biggest economic collapses in Latin American history.

The economy has halved in size in five years and gross domestic product dropped 18 per cent in 2018 alone, as oil output slumped to its lowest level since the 1940s. The International Monetary Fund expects inflation to hit 10m per cent this year.

Some three million people have fled the country in recent years, many of them suffering from hunger. The UN expects thousands more to follow this year. – Copyright The Financial Times Limited 2019