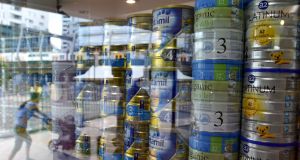 A Sydney police investigation into the theft and export of Au$1 million (€630,000) worth of baby formula has led to the arrest of six people from an alleged family crime syndicate.

Jian Feng Ke (31) was the latest family member to be arrested after police established a special force to investiate the issue last year. He was arrested at Sydney International Airport after arriving on a flight from China, on charges including recklessly dealing with the proceeds of crime and participating in a criminal group.

It is alleged the family, who run a newsagents in the Carlingford suburb in northwest Sydney, ran a syndicate of “co-ordinated thefts” of the items which were then exported to China.

Australian baby formula has become valuable in China since contaminated Chinese formula in 2008 led to the deaths of six babies and saw 54,000 hospitalised.

Detective Superintendent Danny Doherty, commander of the robbery and serious crime squad, said thousands of shipments of baby formula were sent to China.

“This was recorded in the last 12 months so we are thinking it is quite an expansive criminal group exploiting the overseas market at the disadvantage of Australians,” he said. “They are quite literally taking baby formula out of the mouths of babies.”

Other members of the alleged crime gang facing charges include Jian Feng Ke’s mother Lie Ke (48) and her husband Wueqi (53).

Police will allege in court the family were “conducting and controlling” the activities of the theft syndicate across Sydney.

In raids on two properties 4,000 tins of baby formula were seized by police, along with large quantities of stolen vitamins and Manuka honey. More than $215,000 in cash was also seized.

Popular 1kg baby formula products that retail for about $35 in Australia reportedly fetch up to $100 in China.

The problem of bulk-buying formula in Australia for export to China has become so acute in recent months that the two dominant supermarket chains, Coles and Woolworths, each imposed a limit of two tins per customer. Some pharmacies allow customers to purchase just one tin.

In Melbourne, a woman called Catherine Urriola said she was “violently assaulted” with a tin of formula by a shopper at Woolworths when she started filming “chaotic scenes” involving dozens of people grabbing tins from a pallet.

She said people were “running in, getting their two tins and then running out to put them in their trolleys. Then they would run back in and grab another two tins. It was just a cycle.”

Woolworths said the pallet was left in the aisle before closing time so staff could stock shelves the next day.

Police say at least “half a dozen more” arrests are expected in the investigation.