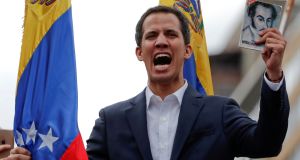 Juan Guaidó, president of Venezuela’s national assembly, holds a copy of the Venezuelan constitution during a rally against president Nicolás Maduro’s government in Caracas on Wednesday. Photograph: Carlos Garcia/Reuters

Venezuelan opposition leader Juan Guaidó declared himself the interim leader of the country on Wednesday with the backing of the United States, as anti-government protests gripped the country.

Within minutes of Mr Guaidó’s declaration in Caracas, the White House issued a statement from US president Donald Trump, officially recognising the 35-year-old as interim president.

Noting that Mr Guaidó was the president of Venezuela’s national assembly, “the only legitimate branch of government duly elected by the Venezuelan people”, Mr Trump said, “The people of Venezuela have courageously spoken out against Maduro and his regime and demanded freedom and the rule of law.”

Canada and several Latin American nations also moved to recognise the legitimacy of Mr Guaidó, heaping pressure on the government of Nicolás Maduro. Mr Trump called on other countries to follow suit.

Mr Maduro said on Wednesday he was breaking diplomatic relations with the US in response. US diplomats were given 72 hours to leave the country.

The citizens of Venezuela have suffered for too long at the hands of the illegitimate Maduro regime. Today, I have officially recognized the President of the Venezuelan National Assembly, Juan Guaido, as the Interim President of Venezuela. https://t.co/WItWPiG9jK

Venezuela has been wracked by protests since Mr Maduro was sworn in for a second term as president on January 10th following a general election that many independent observers dismissed as a sham.

Mr Maduro, who succeeded Hugo Chávez in 2013, has presided over a deepening economic crisis which has led to hyper-inflation and prompted millions of Venezuelans to leave the country.

Mr Guaidó, a founder of opposition party Popular Will, was elected as the national assembly’s president earlier this month and has become the de facto leader of the protest movement that has swept the country.

While it was unclear where the political crisis will lead, Mr Guaidó on Wednesday repeated his call for the military to end its support for Mr Maduro.

A senior US official warned that the US was prepared to hit Venezuela with economic measures. The prospect of international sanctions is weighing heavily on the oil-rich country, which has been hit by falling oil prices in recent years.