Search for missing Emiliano Sala and David Ibbotson called off 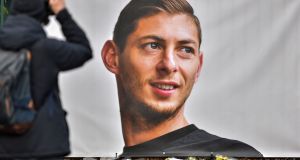 A man takes a picture of flowers displayed next to a portrait of Emiliano Sala in front of the entrance of the FC Nantes football club training centre. Photograph: Loic Venance/AFP

Guernsey Harbourmaster David Barker said they were “no longer actively searching,” and that the final aeroplane in the search party had landed.

Mr Barker said the search team, with assets from the Channel Islands, UK and France, had covered an area of 1,700sq miles but found no trace of the pair or the Piper PA-46 Malibu plane in which they were travelling.

“There has been over 24 hours of continuous searching,with 80 hours combined flying time across three planes and five helicopters,” said Mr Barker. “Two lifeboats have also been involved, as well as assistance from various passing ships and fishing boats.”

Unless there is a significant development, there will be no further updates pic.twitter.com/jbEIFMB3zi

Mr Barker said the team had reviewed all the information available to them and taken the “difficult decision to end the search”.

“The chances of survival at this stage are extremely remote,” Mr Barker added.

Mr Barker said that while they are no longer actively searching, the incident remains open and Guernsey Police will be broadcasting to all vessels and aircraft in the area to keep a look out for any trace of the aircraft.

The search for Sala and Mr Ibbotson had resumed on Thursday morning after it was suspended overnight.

Speaking in Spanish, she told reporters in Cardiff that she feels her brother and his pilot are still alive.

A WhatsApp voice message from Sala said he was “getting scared” and boarding a plane “that seems like it is falling to pieces” according to Argentinian outlet Ole. Additional reporting: PA