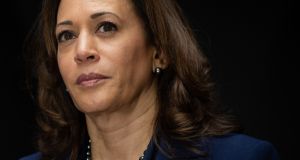 Kamala Harris, a Democrat from California and member of the Senate Judiciary Committee: “The future of our country depends on you and millions of others lifting our voices to fight for our American values.” Photograph: Saul Loeb/AFP/Getty Images

California senator Kamala Harris has become the latest Democrat to announce a run for the US presidency, joining an already crowded field ahead of next year’s presidential election.

Ms Harris (54) announced her bid to win the Democratic nomination on Good Morning America, the most-watched morning television programme in the United States. In a one-minute video released to coincide with her TV appearance, she appealed to voters to “claim our future . . . for our children, for our country”.

“The future of our country depends on you, and millions of others, lifting our voices to fight for our American values,” she said. “Justice. Decency. Equality. Freedom. Democracy. These aren’t just words. They’re the values we as Americans cherish. And they’re all on the line now.”

The announcement was made on Martin Luther King day – a date rich with symbolism. Ms Harris became only the second African-American woman to sit in the US Senate after she won a California Senate seat in 2016 .

Ms Harris, the former attorney general for California, was born to immigrant parents in Oakland, California. Her father hails from Jamaica, and her mother from India. She built a successful legal career as a prosecutor in California, becoming district attorney in 2004 and state attorney general in 2011. In 2016 she successfully contested the Senate race in the state, becoming only California’s third female senator.

During her time in the Senate she rose to national prominence for her deft questioning on committees of former attorney general Jeff Sessions and supreme court nominee Brett Kavanaugh. She has been a vociferous opponent of some of President Donald Trump’s most controversial policies, including his attempt to end DACA, the Deferred Action on Childhood Arrivals scheme that protects “Dreamers” – young undocumented immigrants brought to the United States as children.

Ms Harris is the third woman to declare their candidacy for the Democratic nomination.

Massachusetts senator Elizabeth Warren declared her bid earlier this month, while New York Democrat Kirsten Gillibrand announced her candidacy last week. All three are members of the US Senate.

Ms Gillibrand spent much of the past weekend campaigning in Iowa, the first state to hold its caucus in 2020. The New York senator crisscrossed the state in a two-day trip taking in the key urban centres of Sioux City, Boone, Ames and Des Moines, meeting with hundreds of voters. She also addressed a women’s march at the state capitol.

Other US senators are believing to be mulling bids for the Democratic presidential nomination, including New Jersey senator Cory Booker, Sherrod Brown of Ohio and Vermont senator Bernie Sanders.*

Beto O’Rourke of Texas is also seen as a potential candidate, while former vice-president Joe Biden is said to be close to making a decision on whether he will run. Julian Castro, secretary of housing and urban development during the Obama administration, has also announced a bid.

There were other unconfirmed reports in recent days that Starbucks founder Howard Schulz is exploring running for president as an independent in 2020. Mr Schulz, who stepped down from the company last year, has been sharply critical of Mr Trump.