Venezuela: A brief guide to a crisis years in the making 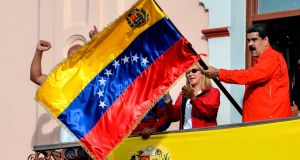 Venezuela’s president Nicolás Maduro, beside his wife Cilia Flores, on a balcony at Miraflores Presidential Palace to announce he was breaking off diplomatic ties with the United States. Photograph: Luis Robayo/AFP/Getty Images

In 24 hours, a 35-year-old Venezuelan opposition leader declared himself the country’s president, the United States recognised him as the legitimate head of state, and President Nicolás Maduro ordered American diplomats out of the country. The crisis is years in the making.

Venezuela once had Latin America’s richest economy, buoyed by oil reserves larger even than Saudi Arabia’s and Iran’s. Yet under Maduro and his predecessor and mentor, Hugo Chávez, who died in 2013, Venezuela’s economy spiralled into mismanagement, corruption and backbreaking debt.

Hunger is killing Venezuelan children at an alarming rate, doctors say, as stores have run out of food and children are suffering severe malnutrition. The country’s hospitals are “like something from the 19th century”, one doctor has said, collapsing under chronic shortages of antibiotics, food and other supplies.

The desperate conditions have led to mass, sometimes violent demonstrations, and skyrocketing crime that has forced Venezuelans to create ever-evolving countermeasures, like decoy mobile phones and armoured cars. And inflation has ballooned to 1 million per cent, making money all but worthless.

The path to two presidents

The economic collapse began in the ways Chávez wrested power, paid for loyalty with oil and purged his enemies. After he inherited a collapsing economy, Maduro granted the military control of lucrative industries and printed money to dole out patronage – worsening the crisis, but retaining power.

Maduro has also held on by stifling dissent: Human rights groups say he has arrested more than 12,800 people. In 2018, he won a widely criticised re-election, with reports of coercion, fraud and electoral rigging. Maduro has also cracked down on the press.

Divided and stifled, the opposition had struggled to pose a challenge to Maduro until a National Assembly leader, Juan Guaidó, managed to rally its factions in recent months. Guaidó, a 35-year-old industrial engineer who was little known at home or abroad until this month, declared himself president on Wednesday.

The humanitarian and economic crisis in Venezuela has not stayed there, alarming its neighbours in Latin America. Thousands of refugees have fled by land and sea to Brazil, Ecuador and other nations, increasing tensions. Thirteen nations in North and South America denounced Maduro this month, urging him to hand over power to Venezuela’s National Assembly to stabilise the country.

The United States, long at odds with Maduro, has become increasingly vocal under President Donald Trump, whose administration has imposed a series of sanctions and held secret meetings with rebellious military officers from Venezuela. Maduro has accused the United States of plotting a coup, and he claimed that unknown enemies used a drone to attack him during a military ceremony last year. – New York Times