Worryingly for the prime minister, there are now voices of dissent within his Socialist Party 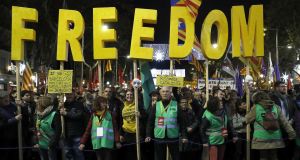 Catalan pro-independence supporters take part in a demonstration under the motto “Let’s overturn the regime”, in Barcelona, Spain, on Friday. Photograph: Toni Albir/EPA

“Perhaps it wasn’t worth coming, just to approve some minor measures,” said the Catalan government’s spokeswoman, Elsa Artadi, as she disdainfully appraised the Spanish government’s controversial visit to Barcelona.

Prime minister Pedro Sánchez appears convinced that it was justifiable, even though an enormous cordon had to be set up around the Llotja de Mar building where the cabinet session took place in order to keep angry protesters at bay. Despite the chaos on the streets, he clearly felt that both the cabinet meeting and the encounter with Catalan president Quim Torra the previous night made it worth coming.

But whatever the benefits, these highly charged gestures undoubtedly also carried a heavy cost for Sánchez as they handed further ammunition to his unionist critics. The Popular Party (PP) and Ciudadanos both, predictably, cast the whole episode as evidence of Sánchez’s willingness to appease the outlaws in the northeast.

However, more worryingly for Sánchez, there are also now voices of dissent within his own Socialist Party. Javier Lambán, the president of the Aragón region, reportedly described Sánchez’s approach to the Catalan issue as “gutless” on Friday.

Lambán is one of many Socialist politicians facing local elections in May who fear that voters will punish them if the Spanish government takes a conciliatory approach to Catalonia. The recent Andalucia election, where the far-right, ultra-unionist Vox party made huge gains and the Socialists suffered, may have set a precedent.

But Sánchez is not the only one counting the cost of Friday’s events. There were a handful of violent incidents which are a blow to the independence movement’s claim that it is unwaveringly peaceful. Video footage of a demonstrator punching journalist Cake Minuesa, of the right-wing media outlet Intereconomía, will undoubtedly be recycled by the unionists who have long insisted that Catalan separatism is inherently violent.

Meanwhile, the willingness of the Mossos d’Esquadra Catalan police to charge at demonstrators would appear to have quashed the notion that sprang up during last year’s failed independence bid that they are a force for separatism.