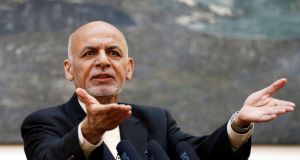 Afghan Taliban representatives and US officials met in the United Arab Emirates on Monday, the Taliban said, amid diplomatic moves towards establishing the basis for talks to end the 17-year war in Afghanistan.

Spokesman Zabihullah Mujahid said representatives from Saudi Arabia, Pakistan and the UAE would also take part in the talks, which follow at least two meetings between Taliban officials and US special envoy Zalmay Khalilzad in Qatar.

He said the meeting, at an undisclosed location, had begun and could take some time, while senior members of the Taliban in Afghanistan said the talks would continue for three days.

The US embassy in Kabul would not confirm any meeting was due to take place.

Diplomatic efforts to resolve the conflict have intensified, although the Taliban have refused to deal directly with the internationally recognised government in Kabul, which it considers an illegitimate foreign-imposed regime.

The Taliban, seeking to reimpose strict Islamic law after their 2001 overthrow, say the presence of international forces in Afghanistan is the main obstacle to peace. Even as the peace process gathers momentum, fighting has continued with heavy casualties on both sides.

Mr Khalilzad, an Afghan-born former US ambassador to Kabul, was named to oversee Washington’s peace efforts earlier this year but the United States has insisted that any final settlement must be led by Afghans themselves.

Although the Afghan government has not taken part directly in the talks, a team from Kabul met US and Saudi officials in the UAE on Sunday to discuss the process, President Ashraf Ghani’s national security adviser, Hamdullah Mohib, said.

Mr Ghani has formed a team to negotiate peace with the Taliban but the movement once again rebuffed the opening on Monday, saying that some media reports suggesting the two sides would meet were “mere propaganda”.

“There is no plan of holding a meeting with representatives of the Kabul administration and neither are they present in the meeting being attended by the delegation of Islamic Emirate,” Mr Mujahid put in a statement.

As well as establishing direct contacts with the Taliban, US officials have stepped up efforts to win support from countries with an interest in Afghanistan, including Pakistan and Saudi Arabia.

Western diplomats said the decision to move the venue of the talks from Doha to the UAE underscored efforts to involve Saudi Arabia, which is hostile to Qatar, more closely in the process and to exert influence on its ally, Pakistan. – Reuters