Belgian PM to stay in caretaker role after resignation 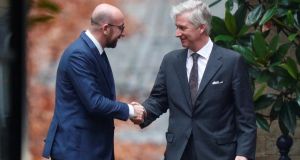 Belgium will have months of minority government after the country’s king accepted the resignation of prime minister Charles Michel but asked him and his ministerial team to stay in office in a caretaker capacity until elections in May.

King Philippe took the decision after 2½ days of talks with party leaders on how to resolve a political crisis that escalated on Tuesday when Mr Michel announced his intention to step down.

Mr Michel quit following his failure to rally parliament behind a minority government. The nationalist N-VA party quit his administration this month.

The royal palace said there was a shared political will “to guarantee sound management of the country until the next elections”.

“The king asks political leaders and institutions, in which he reiterates his confidence, to find a suitable response to economic, budgetary and international challenges, and to the expectations of the people, notably on social and environmental issues,” the palace said.

The decision means that Mr Michel will lead a minority administration of conservatives and liberals. It avoids early elections, which few parties wanted.

The move nevertheless fires the starting gun on an election campaign that is likely to be more bitter because of the decision of the N-VA to walk out on Mr Michel.

Mr Michel’s government had been an experiment in how to manage the rise of the N-VA, a party that takes a hard line on immigration and supports the break-up of Belgium and the creation of an independent Flanders. The nationalists left the government because of their opposition to a UN pact on migration.

The royal palace said Mr Michel would keep the king informed “at regular intervals” of the government’s work in its caretaker role.

Belgium has extensive experience with caretaker governments, having gone for a record breaking 541 days without a fully fledged administration due to difficulties in forming a stable coalition after elections in 2010.

Mr Michel’s name is frequently mentioned in Brussels policymaking circles as a potential candidate for a top EU job after next year’s European Parliament elections, which are also scheduled for May. – Copyright The Financial Times Limited 2018