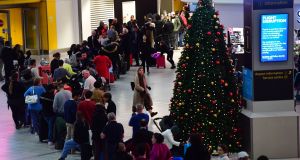 A drone sighting again grounded flights at Gatwick Airport but military measures reassured operators it was safe to reopen the runway.

Chaos briefly resumed on Friday evening after a fresh sighting at around 5.10pm, prompting fears passengers could be stranded after planes were grounded for around 36 hours.

But the airfield reopened for the second time that day, with the planes first resuming in the morning after they were stopped from flying in or out of the airport at 9pm on Wednesday.

Police believe more than one unmanned aircraft are responsible and are investigating the possibility of multiple culprits.

A Gatwick Airport spokeswoman said there had been “a confirmed sighting of a drone”, but heightened measures at the airport meant flights could resume.

“While we investigated, airfield movements were suspended. This was a precautionary measure as safety remains our main priority,” a statement said.

“The military measures we have in place at the airport have provided us with the reassurance necessary that it is safe to reopen our airfield.”

Sussex Police had said the suspension was provoked by “reports of renewed drone activity” while the force was “deploying significant resources to seek and locate the drone and its operator”.

Would-be passengers were again venting their frustration, with fears the police had been freshly outfoxed.

Ana Trinanes feared she may not be able to spend Christmas with family in Spain after her second attempt to fly from Gatwick was placed in jeopardy.

The 49-year-old mother-of-two first arrived at the airport at 6am on Thursday, but her flight was cancelled because of the drone chaos.

Having slept in the airport overnight with fresh flights to eventually take her to family in Galicia booked, she learned her 8.55pm flight would be delayed as she was third-in-line to check in.

She said: “Oh my god, I want to cry, it is unbelievable – again.

“It’s just a small drone against all the police and the army and everyone. It’s unbelievable.

Police prepared to blast the drones out of the sky with a shotgun or jam them with a hi-tech radar system as they continued their hunt for the aircraft and their operators.

Military equipment was being used to stop further drone disruption while a range of tactics are in place if any unmanned aircraft are seen inside the perimeter.

One piece of equipment believed to have been deployed at the airport is the Israeli-developed Drone Dome system, which can detect drones using radar.

It can also jam communications between the drone and its operator, enabling authorities to take control of and land the drone.

Sussex Police Assistant Chief Constable Steve Barry said less sophisticated options were also available, including shotguns, although blasting drones out of the sky was one of the least effective tactics.

Police are keeping an open mind over the motive, with theories including an environmental protest, but are not treating it as a terrorist incident.

Mr Barry said there was no evidence of involvement of a foreign power, but described the drone activity as “really high-end criminal behaviour”.

“This is a really significant criminal offence,” he said.

“There are resources here at Gatwick Airport now to mitigate the threat of that and a lot of resources to bring the offender to justice.”

Meanwhile, noise pollution campaigners have hit back at abuse they attracted for branding the situation an “early Christmas present” that is giving them some “tranquility”.

Community Against Gatwick Noise Emissions, which campaigns against the airport’s busy flight paths, said it was not responsible for the chaos and did not condone the behaviour.

But it did welcome the peace and quiet felt in the countryside when planes were grounded – prompting abusive messages online and accusations they were behind the incident.

After the group reportedly described it as an “early Christmas present”, chairwoman Sally Pavey said the absence of aircraft was a welcome consequence of the drone debacle.

She said: “With no aircraft flying, it’s been a glimpse of how it used to be – tranquillity.

“It’s been a bit of respite for us but that doesn’t mean we condone this behaviour.”

The community group, made up of villagers who live around the airport, are not “radical” or formed of “eco-warriors” and were not to blame for the incident, she said. – PA