Chaos shifts from French streets to politics and the economy

Paris Letter: Debate will attempt to ‘take the pulse of the country’ after widespread unrest 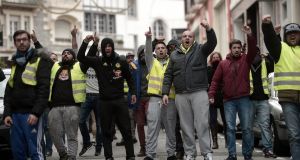 The French political and economic landscape looks like the Champs-Élysées the morning after a riot by the gilets jaunes, the yellow-vested demonstrators who savaged President Emmanuel Macron’s best-laid plans over the past five weeks.

The movement appears to have subsided for the time being. But the government is bungling its PR. The success of the yellow vests in extracting €10.3 billion in concessions has inspired a money grab. While the Élysée splurges in the name of social peace, prime minister Édouard Philippe clings to the idea of budgetary discipline.

Philippe tried to backtrack on some of the Christmas prezzies he promised on November 14th, just before the first demonstrations started. Three measures would be scrapped, the government announced on Tuesday: the “energy cheque” for an additional two million households; higher tax deductions for kilometres travelled to work, and double trade-in bonuses for old, polluting vehicles.

Bad idea, deputies from Macron’s party, La République en Marche, warned. Taking the gifts back would have saved €130 million, but risked sparking further protests. Philippe’s office cancelled the cancellation, saying, “After consultations with majority parliamentarians, the government is maintaining all measures announced by the prime minister in November.”

Vinci Autoroutes, which manages half of France’s 9,158km of highways, announced it would bill motorists who drove through toll booths occupied by yellow vests without paying. Vinci has photographs of the cheats’ licence plates and could trace them. Except that the yellow vests urged motorists through. Politicians called Vinci’s demand for tens of millions of euro scandalous. Amid talk of nationalising highway management, Vinci thought better of it.

The exhausted French police force staged a work go-slow. “We kept our base in line until now, but today it’s over ... The government better manage the conflict with the police better than the one with the yellow vests,” warned Yves Lefebvre of the Unité SGP union.

Interior minister Christophe Castaner offered a one-off bonus of €300 for the 110,000 police and soldiers who were mobilised for the yellow-vest demonstrations. The police held out for permanent pay rises and remuneration for 23 million hours of unpaid overtime, accrued over the past decade.

“We got what we wanted,” Lefebvre announced late on Wednesday. Police will receive an additional €120-€150 per month. Castaner doesn’t know where he’ll find the extra €275 million to pay their overtime. Now civil servants too are clamouring for a pay rise.

The statistical institute Insée had predicted 2 per cent economic growth in France this year. That was revised downwards to 1.6 per cent in October, due to waning consumer demand. The estimate fell to 1.5 per cent this week, because of “the probable effect of the social movement of the gilets jaunes on economic activity”.

In particular, Insée cited late deliveries and “blockages” that persuaded households to postpone spending for restaurants, lodging, leisure and transport. Tourism is suffering because of “anxiety-inducing scenes of violence ... in highly touristic, symbolic places.”

In his great climbdown speech of December 10th, Macron promised “an unprecedented debate” to “take the pulse of the country”. It was to have started five days later, but the government found it was more complicated than it had thought. The National Commission for Public Debate now hopes to organise the debate from mid-January until mid-March. It will address the themes of ecological transition, public services and citizenship. Macron had promised to include immigration, but that was judged too explosive.

In the meantime France’s 36,000 mayors are collecting registries of complaints, a repetition of the cahiers de doléances drawn up in the early stages of the 1789 revolution.

Macron dreamed that pro-Europe, progressive liberal democracy would triumph in next May’s European parliamentary elections. Polls show Marine Le Pen’s Rassemblement National in the lead. The Élysée commissioned a survey that indicated the gilets jaunes would win 12 per cent if they constituted a list.

It’s hard to imagine a movement so scattered that it could not muster leaders to negotiate with the government transforming itself quickly into an organised political force. But Macron reportedly hopes the yellow vests will siphon votes from the RN and Jean-Luc Mélenchon’s far-left France Unbowed.

The yellow vests, far right and far left, are all demanding a constitutional amendment to usher in “citizens’ referendums”. Proponents say direct democracy would revitalise the body politic. Opponents say it will fan populism, and have unfortunate consequences such as restoration of the death penalty. The Socialists insist the first referendum should re-establish the wealth tax, a measure rejected by Macron.