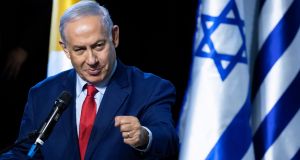 Israeli prime minister Benjamin Netanyahu said US had informed him in advance about their troop withdrawal. Photograph: EPA/Jim Hollander

Prime minister Binyamin Netanyahu has vowed to step up Israel’s fight against Iran’s military presence in Syria, amid concerns that the US military’s announced pull-out would limit Israel’s ability to operate there.

“We will continue to aggressively act against Iran’s efforts to entrench in Syria,” said Mr Netanyahu, who also serves as Israel’s foreign minister and defence minister. “We do not plan to reduce our efforts. We will increase them, and I know that we will do this with the full support and backing from the United States of America.”

President Donald Trump’s announcement was a blow to Israel, which believed that the US would maintain its military presence in Syria as long as Iranian forces were in the country.

Mr Netanyahu said that the US administration had informed him in advance about the troop withdrawal and Mr Trump and secretary of state Mike Pompeo had told him that they had other ways to influence the Syrian war.

Israeli officials expressed concern that the imminent US withdrawal opens the door for Tehran to create a land corridor from Iran, through Iraq and Syria, into Lebanon and the Mediterranean Sea. There is also concern that once the Americans leave, Iran will be able to use an air base that lies near the Syrian-Jordanian-Iraqi border.

At the same time analysts noted that the number of US troops stationed in Syria was relatively small, and Israel has been operating inside its northern neighbour’s territory as it saw fit, without American assistance.

Israel has admitted to carrying out hundreds of air strikes against Iranian and Hizbullah targets in Syria and the assessment in Israel is that the new reality will not have a significant impact on the air force’s ability to act.

A key factor is that Moscow is also opposed to further Iranian entrenchment in Syria and therefore is likely to allow Israel to continue to operate to prevent the Iranians bringing in significant Shia militia fighters, building bases and air fields and transferring sophisticated equipment.

A Jordanian official claims the Russian forces currently in Syria will take action to restrain Hizbullah and Iranian activity there, according to understandings reached by Israel, the United States, Jordan and Saudi Arabia with Russian president Vladimir Putin.

The official told the Yisrael Hayom newspaper that the understandings are the product of behind-the-scenes diplomatic talks that were under way prior to Mr Trump’s decision this week to withdraw American forces from Syria.

According to the terms of the understanding, Russia will continue to give Israel the freedom to strike in Syria and it was these understandings between Mr Trump and Mr Putin that paved the way for the American decision to pull its forces from Syria.