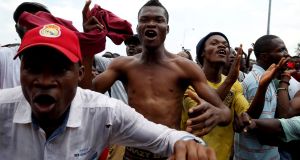 The leaders of the biggest opposition party in the Democratic Republic of Congo condemned the electoral commission’s decision to postpone long-awaited elections for a week and warned that their supporters would not tolerate any further delays, as tensions in the capital reached boiling point.

The presidential vote, which should mean President Joseph Kabila stepping down after almost 18 years in power, was due to take place on Sunday but was dramatically postponed on Thursday. Although the poll was originally scheduled for 2016, the electoral commission said it was still not ready and would require at least a further seven days to ensure all election materials were in place.

“[We] condemn with all of our energy this umpteenth treachery by Joseph Kabila,” Jean-Marc Kabund, secretary-general of the Union for Democracy and Social Progress (UDPS), told an irate crowd packed into the party’s Kinshasa headquarters on Friday. “[We] give Mr Joseph Kabila a severe warning and advise that no other delay will be accepted, even one day.”

As Mr Kabund and other officials sought to incite the throng, Felix Tshisekedi, the presidential candidate of UDPS, by contrast called for calm. Wearing a shirt made from the Congolese flag, he asked supporters to remain peaceful for at least another week.

As party officials shared the microphone and supporters scaled the walls of the compound and chanted from the roofs of adjacent buildings, a 5m high picture of Etienne Tshisekedi loomed over the crowd.

Mr Tshsikedi is one of three frontrunners for the presidential vote, now scheduled for December 30th. The others are Martin Fayulu, another opposition leader, and Emmanuel Shadary, the chosen successor of Mr Kabila.

On Wednesday, before the vote was delayed and citing security concerns, the governor of Kinshasa suspended all election campaigning, citing security concerns. This forced the UDPS meeting off the streets and into its headquarters. Both Mr Tshisekedi and Mr Fayulu say the ban was intended to neutralise a groundswell of opposition support in the capital.

Outside on the streets of the Kinshasa, anger and frustration at the electoral commission, know as the CENI, was fierce.

“We have lost all trust in the CENI, we think it works for Mr Kabila,” said Vincent Mukendi, a construction worker. “Mr Kabila has violated the constitution for too long.”

The CENI says the seven-day delay was unavoidable after a fire last week destroyed important election material that needed to be replaced. Public trust in the institution is extremely low.

“This fire wasn’t the reason, the reason is that Mr Kabila doesn’t want to hold elections,” Jean Baudoin Mayo, secretary-general of the UNC party that is backing Mr Tshisekedi’s candidacy, said to raucous cheers from the crowd.

Mr Kabila has insisted that he wanted elections to take place and was ready to leave office. If he does, it would be Congo’s first ever transition of power via the ballot box.

Kinshasa was flooded with conspiracy theories as to whether the delay would really be for just seven days, or whether the vote would take place at all.

“[We] remain convinced that Joseph Kabila does not want to leave power or organise the elections within the newly announced timeframe,” Mr Kabund told the crowd. “We call on the Congolese people to remain vigilant and mobilised until December 30.”