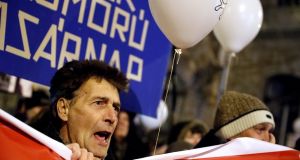 Demonstrators during a protest against a proposed new labour law, billed as the “slave law”, in front of the parliament building in Budapest, Hungary, on Friday. Photograph: Bernadett Szabo/Reuters

Hungarians returned to the streets on Friday after the country’s president, Janos Ader, approved contentious changes to its judicial system and new overtime rules that critics have dubbed a “slave law”.

Mr Ader signed the reforms into law despite protests against prime minister Viktor Orban’s nationalist government, which have brought together a wide range of opposition parties, civil society groups, students and trade unions.

At consecutive protests on Friday evening, thousands of demonstrators were expected to march through the capital to gather at parliament and then cross a bridge over the Danube river to walk up to the Buda castle district where Mr Ader is based.

Mr Orban’s latest reforms have ignited anger over his increasingly autocratic rule, which since 2010 has seen him expand government influence over Hungarian media, law courts and business while doing little about graft and poor services.

The “slave law” obliges Hungarian employees to work up to 400 hours of annual overtime and wait up to three years for payment, while the introduction of administrative courts could hand legal cases involving the state to judges under the ultimate control of the justice minister.

The demonstrators’ demands include abolition of the “slave law”; guarantees that courts and public media will be independent; and Hungarian membership of the EU prosecutor’s office to allow outside scrutiny of corruption.

Mr Orban has refused to back down however, and insists the overtime changes will allow willing workers to make more money while helping Hungary’s growing economy overcome a labour shortage.

Police have occasionally scuffled with protesters and fired tear gas, and on Friday Mr Orban dismissed the demonstrations as “hysterical” and said: “A difference should be drawn between vandalism, violence and expressing a political opinion.”

As police gathered in central Budapest to monitor the latest rallies, Mr Orban suggested the government would wait for the protests to blow themselves out – a tactic that has seen him through previous displays of public dissent.

“Here you don’t have to do something, strike back or show strength, but strength is now in tolerance and in patience.” he said.

The European Union is taking legal action against Mr Orban’s government over reforms that target migrants, NGOs and the Central European University funded by liberal philanthropist George Soros, which is now being forced to move most of its courses out of Hungary.

Protests earlier this week took place outside the headquarters of state television, which protesters accuse Mr Orban of turning into a “factory of lies”, while his business allies have bought up most major national and regional media.

“We are demonstrating not only about the slave law, but against how they are destroying the democratic laws and institutions and the legal system,” Budapest art historian Zsoka Leposa said outside the television centre.

“I’m pretty sure the government is not going to listen,” said Agi, another protester who declined to give her surname.

“But I hope a unified opposition will come out of this. That is our only chance to get anywhere in this country. All we can do is show our numbers and support.”