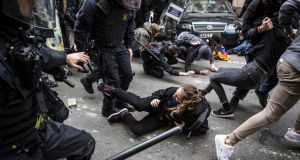 Riot police clash with supporters of Catalan independence during a protest in Barcelona on Friday. Photograph: Angel Garcia/Bloomberg

The reason for the visit was the scheduling of a Spanish cabinet meeting in the city on Friday morning. It was given extra significance by a hastily arranged encounter between Mr Sánchez and Catalan president Quim Torra the previous evening.

The Socialist government insists that the trip has boosted the chances of resolving Spain’s territorial crisis.

“The root of the problem will be solved through dialogue and cross-party agreements that represent a majority of Catalans,” said Meritxell Batet, minister of territorial affairs after the cabinet gathering.

The Spanish cabinet has its weekly meetings in Madrid, so this was an unusual gesture which Mr Sánchez had hoped would show a willingness to engage with the people of the northeastern region.

But the Catalan government described the visit as a “provocation” because it coincided with the anniversary of an election last year, which was imposed by the previous Spanish government after it had introduced direct rule in the region. Many Catalan nationalists took a similar view, prompting them to organise protests throughout the day.

Radical activists blocked several roads in Barcelona and elsewhere in the region with branches and burning tyres, before chanting demonstrators gathered outside the Llotja de Mar building in central Barcelona where the cabinet met mid-morning.

There were some violent scenes as masked protesters threw missiles and railings at police. A total of 12 people were arrested and 28 police officers were injured throughout the morning protests, before further demonstrations in the evening.

In the cabinet session itself, the government approved a raise in the minimum wage. Also, in a move clearly designed to ease tensions with nationalists, the cabinet approved a motion condemning the killing of Catalan leader Lluís Companys by the forces of Francisco Franco in 1940. In addition, the cabinet agreed to rename Barcelona’s El Prat airport after former Catalan president Josep Tarradellas.

Although the Catalan government played down the importance of the measures, it did make efforts to cast Thursday’s meeting between Mr Sánchez and Mr Torra as an international summit. There was no breakthrough in the meeting, although the two men agreed to continue a dialogue.

However, the fundamental disagreement at the heart of the territorial crisis remains. Speaking for the Spanish government, Ms Batet rejected the possibility of holding a referendum on independence, while the Catalan government appeared not to rule out a return to a unilateral drive for separation from Spain.

“We don’t rule out any mechanism that is democratic and not violent,” said Catalan government spokeswoman Elsa Artadi.

Meanwhile, Mr Sánchez’s visit drew fierce criticism from unionists in Madrid, who accused him of seeking to appease the independence movement in order to ensure its support in the Spanish parliament.

Inés Arrimadas, leader of the Ciudadanos party in Catalonia, said the day’s unrest showed that Catalonia “is a lawless territory dominated by separatist cells”.

The leader of the conservative Popular Party, Pablo Casado, described Mr Sánchez’s meeting with the Catalan president as “an act of betrayal against Spain”.