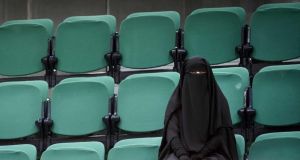 A woman sits in the public gallery of the Dutch senate before a debate on legislation concerning face covering in public places on November 23rd, 2016. Photograph: Bart Maat/EPA

In the first officially recorded “incident” following the introduction of the “burka ban” in the Netherlands last week, a Muslim woman wearing a niqab was wrongly ordered by council staff to leave a municipal playground where she was supervising her children.

The incident happened on Sunday in the eastern city of Nijmegen, where the council received a complaint just a few minutes after the woman and her family arrived – and instructed her to leave without first asking the advice of the police.

The Dutch ban – which is less strict than in some other EU countries, such as France – applies only on public transport and in public buildings, such as schools, universities and hospitals, for instance – and not in other public spaces, such as in the street or in the precincts of public offices.

When the council finally reported the incident to the police, it was told that the woman had been doing nothing wrong – and that it was its own staff who had acted illegally and inappropriately without checking the detail of the legislation.

The council has since apologised to the woman and given her a free ticket for the playground, worth €4.85.

“It was a misunderstanding,” said a spokesperson. “It should not have happened. We accept that it was annoying, and we apologised as soon as we could.”

There had been a council plan to visit business and institutions to brief them on the legislation, which came into effect on August 1st, and that would go ahead immediately, the spokesperson added.

“We felt it was too soon. We decided to wait a while because there aren’t many burkas or niqabs worn in Nijmegen. Then this happened when the law was just four days old. . .”

Local lawyer Franc Pommer said the Nijmegen incident illustrated that there had been a total lack of official clarity about where the ban applies – and worse still, about who will enforce it.

In Amsterdam, the ban caused a row in the Labour Party after a city councillor and a group of supporters wore rainbow-coloured niqabs to the weekend’s Pride celebrations – and called themselves The Burka Queens.

However, the tweet was slapped down immediately by Marjolein Moorman, the leader of the Labour Party on Amsterdam City Council, who described the stunt as “facile”.

“To me, the burka symbolises inequality between men and women,” she said. “A man can show himself, but a woman has to cover up. That has nothing at all to do with freedom.”