An initiative known as Durable Solutions, funded by the EU, is helping families displaced in Somaliland to run small businesses through startup grants. Video: Concern 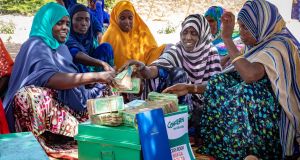 Almost 20 women are sitting on rugs under the canopy of a large tree with a steel box in their midst with three separate locks.

They live in a rural area south of Borama and formed a self-help group called Janagal, which means “paradise” in Somali. It was set up after the 2017 drought with training and seed capital of $376 provided by Concern Worldwide.

They sell women’s clothes and shoes which they buy in from the town of Togwajale. “Business is good. We make a good profit,” explains their nominated spokeswoman. In fact, it’s so good they plan to diversify into livestock products and to sell them to farmers in their area, which is made up of 350 households scattered over a wide area.

Each member has to deposit the equivalent of $82 monthly into their minibank. Profits are used to reinvest in the business, to help families in difficulty and people who are ill and need healthcare.

The women ask if we would like to look at their current assets. The box is opened by three separate keyholders and a large wad of Somali shillings is put on display. “We have $988,” the spokeswoman declares proudly as a smaller amount of dollar bills are laid out.

One of the women suggests they might train us on how to run a business; they all laugh. On a more serious note, their success has spawned other small businesses formed by neighbours acting on their own initiative without input from outside agencies but using the same approach.

Janagal’s success is clear: “The money made a difference. We did not migrate,” the spokeswoman said.

Generally, there are 20 women per group who over a year go through two training modules. “The objective is to build strong groups who establish an internal saving and loan scheme which the women decide and manage themselves,” explains Rory Crew of Concern, who is also finance and systems director with Somali Cash Consortium, which helps provide direct support via mobile phones.

When the groups are “mature”, Concern opens a formal bank account for the group and provides a start-up grant so the group can establish one or several joint businesses. Group members come from the same community, have a similar social status and share the same problems. Trust and good relationships between group members are very important.

The second training module and a vision-building exercise focus on business skills, such as simple cost calculation and developing a business plan.

“Mostly, the women engage in simple activities, such as animal fattening (buying goats at low prices during lean season and fattening them up to sell them at high prices before national holidays), petty trade, some vegetable production.”

Participants are very positive about the financial gain from the programme but also the social dimension – the opportunity to meet other women with similar needs. It has boosted their self-confidence and standing in the community.

In parallel there is an integrated programme incorporating agriculture, food, income, markets and education. Focused on supporting sustainable livelihoods, it targets school-aged young people, vulnerable women, farmers and pastoralists. Separate efforts are made to build resilience at community level.

Some 89 per cent of members reported their resilience to shocks and stresses had increased. They can access emergency assistance and collective support more easily. They benefit from social networks and improved livelihoods.

Urban self-help groups do better with business development and success, but this may simply be due to the easier link with markets and potential customers. That is confirmed by the range of businesses in Ayah 4 settlement outside Hargeisa.

Yurub Hussein Mohmoud has lived there for four years following the loss of all her livestock from drought. She prefers life there where she has her own shop selling food, toiletries, cigarettes and camel’s milk. She is a participant in an EU Emergency Trust Fund for Africa project aimed at creating long-term solutions for displaced populations.

Ista Hil Yusef heads up a Concern-supported group known as Alikhwua (“sisters”), with each member having their own business. She sells charcoal, vegetables, eggs, milk and snack food and travels to a market at 4am each day to source fresh produce.

Asked about the secret of success, she cites a rule whereby members are fined for late payments into their fund, and a Friday gathering to discuss what they will do with the money.