Droughts force thousands to abandon way of life in Somaliland

Locals in Carracad, Somaliland, have been hit by drought and cyclones, threatening their agricultural way of life. Video: Concern 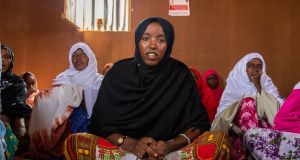 Khadan Mohammed Hamed (19): She knows about climate change and soil erosion from her biology class and realises that combination has eroded a way of life. Photograph: Gavin Douglas/Concern Worldwide

They are the vanguard of a cohort likely to soon number many millions of people in climate-vulnerable locations across the planet.

They are crammed into supposedly temporary camps to cater for the tens of thousands of villagers forced off the land because of sustained droughts.

Conditions in settlements on the outskirts of Hargeisa, the capital of Somaliland, and near the city of Borama are primitive – so many people living in close proximity without running water or toilets and with little electricity.

Home is in the form of a flimsy makeshift tent, a corrugated iron shack or a tiny house of one room, two at best. Solid waste and vast amounts of plastic are intermittently heaped on the side of narrow streets. There is next-to-no public lighting. What there is comes courtesy of small solar panels, giving a hint of what could be in terms of comfort and safety if the cheap renewable energy source was more fully deployed.

Water is trucked in, the same way 70 per cent of Hargeisa is supplied, though there are plans to build a water supply system with international support. For now, water has to be boiled, invariably by way of a wood fire, before consumption.

Listening to their stories of forced migration, many are clearly traumatised at having to abandon a rural way of life, which up to a few years ago was feasible in spite of intermittent drought. Many pine to return to the land but they know it is not feasible.

They are officially described as “internally displaced people” (IDPs), forced to flee their home but who remain within the country’s borders. In reality, most are climate refugees.

In Somaliland, a self-declared state in east Africa twice the size of Ireland, they are estimated to total 600,000 people, though that number can rise sharply in response to drought, flooding or a cyclone, events occurring more frequently due to climate disruption.

Through interpreters, the common thread emerges: loss of livestock due to more frequent droughts and not enough water to sustain their pastoral existence. In contrast, increased floods are often a contributory factor, as they wash away crops, turn fields into gulleys and undermine attempts to diversify. It ends with the inevitable move to the city and for some a camp, where they have lived for almost 10 years.

With dignity, women outline their personal circumstances in an unvarnished way. In more ways than one they are household heads and look after money efficiently. Sometimes it’s a consequence of husbands and sons still working in rural areas.

Listening to their stories and observing their surroundings is enough to graphically illustrate arduous circumstances. It is a harrowing experience because their distress is palpable and yet solutions seem obvious and inexpensive to an outsider.

Sahra Badal, who has been five years and seven months in Dgalli, still describes herself as a pastoralist. A divorcee with five children, she had 35 goats and a donkey to sustain the family. Now it’s just three goats that wander around stony land with little vegetation where the camp is located – most goats in the vicinity have a tag around their neck with the mobile phone number of their owner.

“Life is very difficult but cash helps,” she says, referring gratefully to monthly support of $60, which enables her to send her children to school and helped her set up a small business selling fruit and vegetables.

Her neighbour Nura Ismail Saed, who is two years in the camp, would prefer to move back to the rural area from which she came with her five children but she suggests this is unlikely. Asked if that made her sad, she replies: “A lot, a lot.”

In Mooga B, which has the least facilities – no shops, no school, no available land nearby, the women repeatedly highlight the absence of toilets; one describes how a pregnant woman had to be brought to a mobile health clinic in a wheelbarrow.

Indications of emerging resilience are the only heartening aspect in the face of such poverty. Milgo Ahmed Hashi sells milk from her home, which she buys in from Hargeisa. With no refrigeration, she uses plastic bags in an attempt to keep it cool and plans to have it all sold by 5pm daily so it doesn’t sour. The profits enable her to feed and clothe her 10 children. She hopes there will soon be enough to send her children to school.

Khadan Mohammed Hamed (19) completed her secondary education, and though she failed her exams as she was affected by her mother’s death at the time, she hopes to resit them. “I hope to continue, to become a doctor,” she adds. She knows about climate change and soil erosion from her biology class. She realises that combination has eroded a way of life for “people, who were successful farmers, and not farmers any more”.

That resilience is obvious the next day when visiting a more established settlement, Ayah 4. A large sign indicates 350 concrete housing units were constructed by UN-Habitat with support “from the people of Japan”. There is an air of permanency though some still live in traditional tents. Many are reconnecting with land nearby (provided by the government) and have more significant livestock numbers. Local commerce is evident with tiny shops, a local market and a small cafe selling tea.

It is clear that self-help groups, including some aimed at teenagers, set up with support from Concern Worldwide and other aid organisations, are helping to form a backbone for the community.

Emerging entrepreneurship is real. Some have savings, which suggests better prospects and quality of life may be realisable. But it means also hard questions have to be faced up to among large sections of what were once nomadic people, according to the director of the Somali Cash Consortium, Alessandro Bini. Is urbanisation, including a shift to small business and services industry, the best option for most of these people? Does it mean pastoralism must change to agriculture which is inevitably more intensive, entailing, for example, pesticides?

Implemented correctly, he believes more sustainable communities are possible – backed by “a long-term, predictable safety net” covering the basic needs of a good proportion of the population on a constant basis.

Drought year after year makes rural communities weak and vulnerable, according to Abdi-Rashid Haji, Concern Worldwide’s Somalia country director, who recalls how a woman illustrated her plight to him by placing a stick in a piece of muddy, unstable ground, adding: “This was my farm.”

“That is when you lose confidence and you end up in an IDP camp,” he says.

Displacement also gives rise to concerns about safety and security, and underlines the need for child protection. Sexual and gender-based violence in camps is an additional risk. In that scenario, female-headed households, children, older people, those with disabilities and marginalised communities are especially vulnerable to abuse, as well as disease and malnutrition.

Reports indicate some urban IDPs in Hargeisa and Burao cities are experiencing “extreme food security outcomes”; and the official classification “catastrophe” is figuring more frequently. A visit to a Save the Children health clinic on the outskirts of Borama confirms how close communities, even those in IDP camps, are to famine.

Similar levels have been recorded this year, before the worst effects of the latest drought are predicted to kick in. Poor hygiene arising from a lack of sanitation gives rise to widespread diarrhoea, especially among the young, which further exacerbates their vulnerability.

The increasing lure of the city is summed up by Roda Osman living in the rural village of Jir Jir. She has 13 children, three of whom are staying with relatives in the city of Borama and attend secondary school there. She hopes they will get a scholarship to go to university or get a job. “Without education, life is without light,” she adds.

Droughts and Cyclone Sagar reduced their livestock to 10 goats and two camels. Crops in recent years have only yielded fodder. She is surviving because of cash payments via mobile from Concern. Fearing further livestock losses, she is quietly banking on her children already in the city, and a hope that with a job they will be able to build a house “and take us to the city”.