Why is Kashmir a flashpoint in India-Pakistan tensions? 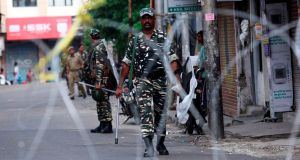 Kashmir, a mountainous valley that borders Pakistan and India, has been a centre of conflict between the two nuclear-armed countries since the 1947 partition of British India. At the time of the partition, the British agreed to divide their former colony into two countries: Pakistan, with a Muslim majority, and India, with a Hindu majority. Both nations covet Kashmir, which is Muslim majority, and occupy portions of it with military forces.

For decades, an uneasy stalemate has prevailed, broken by occasional military incursions, terrorist attacks and police crackdowns. But on Monday, the Indian government decided to permanently incorporate the territory it controls into the rest of India.

The administration of prime minister Narendra Modi revoked Article 370 of the Indian constitution, a 70-year-old provision that had given autonomy to the state of Jammu and Kashmir, which includes the Hindu-majority area of Jammu and the Muslim-majority Kashmir valley.

The government also introduced a Bill to strip the region of statehood and divide it into two parts, both under direct control of the central government. Modi, a Hindu nationalist, had campaigned for re-election in part by stoking patriotic fervour against Muslim-led Pakistan. He promised the full integration of Kashmir, a cause which his party has championed for decades, and now he is delivering on that pledge.

Pakistan condemned India’s moves. Pakistan’s prime minister, Imran Khan, called on US president Donald Trump to follow through on an offer he made two weeks ago to mediate in the Kashmir dispute.

What are the roots of the conflict?

In 1947, the sudden separation of the area into Pakistan and India prompted millions of people to migrate between the two countries and led to religious violence that killed hundreds of thousands. Left undecided was the status of Jammu and Kashmir, a Muslim-majority state in the Himalayas that had been ruled by a local prince. Fighting quickly broke out, and both countries eventually sent in troops, with Pakistan occupying about one-third of the state and India the rest.

The prince signed an agreement for the territory to become part of India. Regional autonomy, which was formalised through Article 370, was a key inducement. Despite efforts by the United Nations to mediate the Kashmir dispute, India and Pakistan continue to administer their portions of the former princely territory while hoping to get full control of it. Troops on both sides of the so-called line of control regularly fire volleys at each other.

Article 370 was added to the Indian constitution shortly after the partition of British India to give autonomy to the former princely state of Jammu and Kashmir until a decision was made about its rule. It limited the power of India’s central government over the territory. A related provision gave state lawmakers the power to decide who could buy land and be a permanent resident – a provision that irked many non-Kashmiris.

Although it was intended to be temporary, Article 370 says that it can only be abrogated with the consent of the legislative body that drafted the state constitution. That body dissolved itself in 1957, and India’s supreme court ruled last year that Article 370 is therefore a permanent part of the constitution.

The Modi government disagrees and says the president of India, who is beholden to the ruling party, has the power to revoke the article.

Why did the conflict heat up this year?

The immediate cause was the February 14th suicide bombing by a young Islamic militant, who blew up a convoy of trucks carrying paramilitary forces in Pulwama in southern Kashmir. Indian aircraft responded to that attack by flying into Pakistan and firing air strikes near the town of Balakot. The Indian government claimed it was attacking a training camp for Jaish-e-Mohammed, the terrorist group that claimed responsibility for the bombing.

The next day, Pakistani and Indian fighter jets engaged in a skirmish over Indian-controlled territory, and Pakistani forces downed an Indian aircraft – an aging Soviet-era MiG-21 – and captured its pilot. It was the first aerial clash between the rivals in five decades.

Pakistan quickly returned the pilot, easing the diplomatic tensions. But Modi exploited a wave of a nationalist fervour over the Pulwama attack as part of his re-election campaign that helped his Bharatiya Janata Party win a sweeping victory.

Will the United States and other global powers get involved?

On July 22nd, Trump hosted Khan at the White House. Although the meeting was focused on how to end the war in Afghanistan, Trump told reporters that Modi had asked him to help mediate the Kashmir dispute. Khan welcomed his involvement. The Indian government denied making any mediation request and has long insisted on direct negotiations with Pakistan to resolve the dispute.

Under Trump, US foreign policy has shifted away from Pakistan, a long-time recipient of US aid, toward India, which the administration views as a bulwark against China’s rising influence in Asia. China, for its part, has become a close ally and financial patron of Pakistan. The Chinese government recently urged India and Pakistan to settle their conflicts through bilateral discussions. China shares a border with Jammu and Kashmir state, and India and China still do not agree on the demarcation line.

What is likely to happen next?

The constitutional changes, issued through a presidential order, could face legal challenges. Pakistan said it will “exercise all possible options to counter the illegal steps” taken by India. Modi’s moves to integrate Kashmir into India are likely to be popular in much of the country. But there is widespread panic in Kashmir, where there have been decades of protests against Indian rule. – New York Times