Irish people most optimistic about future of EU, survey finds 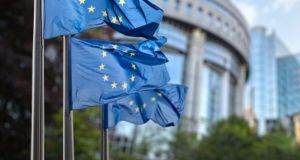 On average, 61 per cent of Europeans were optimistic about the future of the EU. The United Kingdom registered at 47 per cent, lowest among all member states except for Greece. Photograph: iStock

Irish people are most likely to be optimistic about the future of the European Union, despite the risk of the United Kingdom crashing out of the union without a deal at the end of October, according to a new Eurobarometer poll released this week.

On average, 61 per cent of Europeans were optimistic about the future of the EU. The United Kingdom registered at 47 per cent, lowest among all member states except for Greece.

Domestically, of the 1,028 interviewed for the poll, 32 per cent said the economic situation in Ireland would get better over the next 12 months – a 6 per cent decrease from the previous Eurobarometer poll last autumn.

Twenty-nine per cent felt that their personal job situation would get better, and 35 per cent said that the employment situation in Ireland would improve over the next year.

The three most important issues facing Ireland, according to the poll, are housing (54 per cent), health and social security (41 per cent), and a conglomerate of the environment, climate and energy issues (17 per cent). However, when asked which issue facing the EU was the most important, Irish respondents said that climate change (33 per cent), immigration (28 per cent), and terrorism (21 per cent) topped the list.

With Brexit looming, 68 per cent of UK respondents said they were in favour of free movement of EU citizens, while 19 per cent were against it. In regard to EU’s common trade policy, the UK showed 56 per cent for and 23 per cent against, with 21 per cent saying they didn’t know or refused to answer.

Eighty-seven per cent of Ireland was for free movement of EU citizens, and 82 per cent supported the EU common trade policy. The free movement of people, goods and services ranked as the top benefit of EU membership for Ireland, with the euro and peace among member states rounding out the top three.