Kashmir in lockdown after India scraps its autonomy 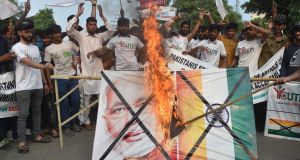 Activists of the “Youth Forum for Kashmir” group shout slogans as an Indian flag with a picture of prime minister Narendra Modi is burned in Lahore, Pakistan on Monday. Photograph: Arif Ali/AFP/Getty Images

India’s northern disputed Jammu and Kashmir region remains cut off from the rest of the country, two days after the federal government scrapped its special constitutional status after nearly seven decades.

All land and mobile telephone lines, television and radio services and internet links remained cut off, triggering rumours that have panicked a majority of the Himalayan state’s more than 12 million residents.

The authorities arrested local politicians, including two former state chief ministers, and directed thousands of tourists, Hindu pilgrims and labourers from across India to leave Kashmir before imposing a curfew.

Other than scrapping Article 370, which dates to the early 1950s and grants Muslim-majority Kashmir special powers to make its own laws, federal home minister Amit Shah also ended one of its more controversial provisions, which banned outsiders from acquiring property and obtaining state government jobs.

He also informed parliament that the state would be bifurcated into the federally administered territories of Ladakh – bordering Tibet – and Jammu and Kashmir, the former without a legislature.

Presently all three regions are part of the same state under the special powers provision that came into force shortly after independence from British colonial rule in 1947, following a complex series of events.

In anticipation of Mr Shah terminating Kashmir’s special status, and fearful of a backlash, the federal government ferried more than 43,000 Central Reserve Police Force paramilitary personnel to the state over the past week.

The additional paramilitaries supplement some 500,000 Indian army personnel already based in the region to fight Kashmir’s three-decade long Muslim insurgency, which has claimed more than 70,000 lives.

“A backlash against New Delhi’s decision is imminent, as many in Kashmir view the decision to scrap Article 370 as a breach of trust,” Shah Fesal of the Jammu and Kashmir People’s Movement party told Reuters. Kashmiris are taking it as an act of humiliation, he added.

Meanwhile Pakistan, which controls a third of Kashmir and lays claim to the rest, has strongly condemned India’s decision to revoke the Himalayan principality’s special status.

Its foreign ministry spokesman in Islamabad declared that “no unilateral step” by the Indian government can change Kashmir’s disputed status as “enshrined in the United Nations Security Council resolutions”.

He said the measure would never be acceptable to the people of Kashmir and Pakistan, and that Islamabad will “exercise all possible options to counter the illegal steps”, but did not elaborate.

Kashmir, which is also claimed by India in its entirety, blames Pakistan for fuelling the 30-year-old insurgency. Islamabad denies these charges, saying it provides the insurgents only “moral and diplomatic” support.

The nuclear-armed neighbours have fought two of their three wars over Kashmir since independence and an 11-week long border skirmish in the principality’s Kargil region in 1999, in which 1,200 soldiers died on both sides. The latter came to the brink of a nuclear exchange, but an escalation was prevented by US intervention.

Indian security officials fear that the ramifications of abrogating Kashmir’s special status are likely to manifest themselves in armed unrest in the insurgency-ridden region.

They fear militant groups will escalate attacks, which in turn will further extend the already overstretched Indian army and paramilitaries in one of the world’s most militarised regions.

There are also likely to be legal challenges from Kashmiri politicians and unrelenting opposition from Pakistan, for whom Kashmir remains the “unfinished business” of independence.

“There will be a sullen peace [in Kashmir], militarily secured that we will mistake for victory,” said political analyst Pratap Bhanu Mehta. The army, he warned, would now potentially be used more and more as the sole basis for keeping India together.