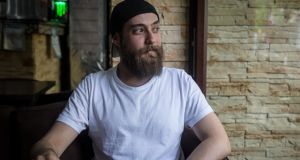 Salah Estwani, 26, has received instructions from German authorities to go back to Syria. Photograph: Sally Hayden

It’s been two weeks since Salah Estwani got a seven-page letter telling him he needs to go back to Syria. He’s 26 – a Shakespeare lover with a bushy beard, a backwards baseball cap, and a warm smile – and he’s terrified.

We’re on Sonnenallee in Berlin’s southeast. Previously nicknamed “Little Beirut”, the influx of refugees to Germany over the past few years has led to it becoming a hangout for Syrians. They come for tasty shawarma and Arabic desserts, gathering on the streets outside shisha bars to discuss the achievements and stresses of their new lives in Europe.

Estwani can’t join in. He is caught in a bureaucratic nightmare, meaning he can’t study and can’t work, and his asylum claim hasn’t been granted. He was one of more than a million Syrians who arrived in Europe between 2015 and 2016, fleeing the war that has devastated his country.

Like many others, he was first registered in another European border country: in his case, Spain. At the time, Germany was still allowing refugees registered elsewhere to claim asylum, so he travelled on there, but Spain accidentally processed his application before cancelling it. This led to Germany rejecting his case.

Although his situation is an outlier in some ways, Syrians across Germany are worried the tide is turning and others may be pushed to go back too.

Migration has dominated political debate in Germany since 2015, when chancellor Angela Merkel, Europe’s longest-serving democratically elected leader, declared the country’s borders open to refugees fleeing war and persecution. Pressure from conservatives and the need to prevent a collapse of the government led to her agreeing to adopt a harder line on migration last year.

Elections in 2017 saw the far-right Alternative für Deutschland (AfD) party gain seats in parliament for the first time, and as anti-immigrant sentiment enters the mainstream, refugees are feeling the strain.

The day before we met Estwani, posters appeared across Berlin, reading: “Go home. The war is over. Syria needs you.” A product of the far-right Identitarian Movement, they were quickly taken down, but not before gathering a lot of attention among refugee communities.

“Syria needs me but I don’t need it,” one young man quipped in response, in German.

In June, Germany’s state interior ministers extended a nationwide ban on deportations to Syria until the end of the year, when it will be assessed again. Previous reporting by tThe Irish Times revealed that refugees who voluntarily returned to Syria from Germany faced arrest, torture and conscription, and some were killed in prisons run by Bashar al-Assad’s regime.

Despite the ban on deportations, the German federal states (Bundesländer) and the German Federal Office for Migration and Refugees have quietly begun to offer financial incentives to refugees who return to Syria voluntarily.

In 2017, 199 Syrian refugees departed with this financial support, according to a spokesman for the Federal Office for Migration and Refugees. The following year, there were 466 supported returns to Syria, and 77 more between January and March this year.

Though the International Organisation for Migration supports repatriation to other countries, spokeswoman Sabine Lehmann said they do not assist returns to Syria. “Present conditions in Syria are not conducive for voluntary repatriation in safety and dignity,” she said. “Significant risks remain for civilians across the country.”

Syrians in Germany say not all refugees are aware of the risks of returning, meaning those who find life difficult in Europe can be persuaded to try it. In an Italian restaurant in Berlin’s inner-city Neukölln area, the manager, who asked not to be named, said a former staff member went back to Syria.

“He got fed up with prices of renting a house, paying the agency commission; it was too high. He wasn’t able to rent his own place, so he was staying at relatives,” the manager said. “When he went back he was detained for questioning for two months. The last I heard was that he was still in prison, and then there was no more news of him.”

“There is pressure. The German government is divided,” said Muhammad Muosa, a 33-year-old from Syrian port city Latakia, who is studying event management. He was referring to schisms in the current German government – a coalition of Merkel’s centre-right Christian Democratic Union, its sister party the Christian Social Union, and the centre-left Social Democrats .

“Previously the government’s treatment of refugees was excellent, but recently, because of some individual stupid acts by refugees – destroying a bar, etc – there is some change in the government policy. But as a government they should not look at these individual cases and change the policy based on individual acts,” said Muosa.

He was sitting at a multicoloured wooden picnic table, at the back of Refugio, a community space and cafe set up in 2015. Muosa moved in after he arrived in Germany, and now works as a barista. He’s comfortable, he said, though his leg shook with anxiety as he spoke to us.

Muosa was granted only temporary residency in Germany, and not asylum, but he has no plans to return to Syria. “What am I going to go back to, a f***ed-up country? There’s nothing for me to go back to.”

With family members wanted by secret intelligence, he says he would be in trouble, even if the war ended.

In northern Berlin, we met Syrian human rights lawyer Anwar al-Bunni, who spends his time investigating abuses by the Assad regime and Syrian intelligence services. Behind his desk was a Syrian opposition flag, and in a corner of the office was a matching scarf.

“You know the parties use the refugee issue to get more public support,” al-Bunni said, agreeing Syrians are being made feel increasingly uncomfortable in Germany. “The Syria issue, they use it, the political parties use it to fight themselves, and the refugees always pay the price for that.”

He said European politicians needed to realise that forcing people back to Syria could lead to a much greater influx of refugees from other Middle Eastern countries, because leaders who saw Assad getting away with crimes against Syrian citizens would be empowered.

“In Syrian laws the policemen, military and security men have full immunity from prosecution. They can do whatever . . . So you send Syrians to a situation where anybody can kill them without any accountability.”

About 128,000 Syrians have been detained or killed in prisons since the eight-year-old war started, according to the Syrian Network for Human Rights, of whom nearly 14,000 died as a result of torture.

That’s the fate Estwani worries could await him if he is deported.

The former architecture student has come a long way in the three years since he arrived in Germany, when he spent six months dodging security and sleeping on trains, because he knew no one and had nowhere to stay.

He isn’t allowed to work, so he spends his time volunteering, teaching refugees English and Arabic. An aspiring actor, he played the eponymous role in the Merchant of Venice with a community theatre group.

“Here I got to know Shakespeare really well. He was talking about politics and homosexuality hundreds of years ago,” Estwani said.

The only bad experience he has had with German citizens was someone walking up on the street once, hissing “You are a terrorist” in his ear. “It’s because of my beard!” he joked, saying generally people are very kind.

Last year Estwani was accepted to study in Potsdam University, but couldn’t take the place because of his insecure status in the country.

When asked about Estwani’s situation, a spokesman for Germany’s Federal Office for Migration and Refugees told The Irish Times an asylum application is declared to be inadmissible if another EU state is responsible for it, even though Estwani has an official document from Spanish authorities saying he has no asylum case in Spain.

“Honestly, I feel I am dying inside and they are killing every hope I have,” Estwani said. “What I am going to do next is what I’ve been doing for the last three years, keep struggling to get a normal life, unless I give up.”

This article was produced with funding from the Migration Media Award, funded by the EU, but is the work of the authors