Brexit talks approach ‘tunnel’ amid positive noises from both sides 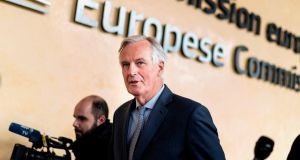 Whether there is enough time, however, to bridge still-considerable gaps and put an agreement into legal language ahead of next Thursday’s summit remains doubtful to many officials and diplomats in Brussels.

EU ambassadors were told by EU chief negotiator Michel Barnier, following consultations with Dublin and a “constructive” meeting with UK Brexit secretary Stephen Barclay, that sufficient reassurances had been received from Downing Street to turn technical talks into fully fledged negotiations that would proceed over the weekend.

Spokesmen for both sides remained tight-lipped about the content of the new British proposals.

A statement from Mr Barnier, however, did emphasise that the commission bottom line remained unchanged. The implication was that what we were seeing was the evolution of the British position in a way that would make it compatible with long-standing EU demands.

“The EU position remains the same,” the EU task force statement said, “there must be a legally operative solution in the withdrawal agreement that avoids a hard border on the island of Ireland, protects the all-island economy and the Belfast Agreement in all its dimensions and safeguards the integrity of the single market.”

Asked by journalists in London whether his new proposals would still mean Northern Ireland leaving the customs union, Mr Johnson said: “I can certainly tell you that under no circumstances will we see anything that damages the ability of the whole of the United Kingdom to take full advantage of Brexit.” His comments were seen by many observers as code for leaving the customs union and being able to avail of the benefits of new trade agreements.

Reassurance that any emerging deal will conform with the EU bottom line has enabled talks to enter the so-called negotiation “tunnel”, when developments are kept strictly within the negotiating teams .

Mr Barnier did not even brief ambassadors on Friday on the detail of the offer beyond saying that the new proposals did lay the basis for a possible deal.

Earlier, European Council president Donald Tusk posted on Twitter that “promising signals” from the Taoiseach arising from his talks with Boris Johnson on Thursday and their mutual recognition of a “pathway” to a deal would allow him to extend the talks deadline beyond Friday.

“There’s no guarantee of success, and the time is practically up, but even the slightest chance must be used,” he wrote. “A no-deal Brexit will never be the choice of the EU.”

Ambassadors meet on Monday and ministers on Tuesday to prepare the discussions for the summit. The leaders may decide to defer consideration of an expected request for an extension from the UK until closer to the end of the month to allow talks to proceed.

Speculation in Brussels on the plausible shape of the UK proposals focused on what was being seen as the idea of a hybrid of two previously rejected ideas: firstly, the original Northern Ireland-only backstop, in which the North remained part of the customs union, a proposal rejected by unionists who argued that customs posts down the Irish Sea represented a threat to the constitution.

Secondly, British proposals for “customs partnerships” that would have seen the UK police its external border as the EU’s external border, collecting tariffs on its behalf and monitoring regulatory compliance, in this case internal controls on the Irish Sea between two parts of a British customs union.

The latter option was rejected by the EU, which may, however, be willing to contemplate such arrangements applied, like in the original backstop, only in the limited circumstances of Northern Ireland.

1 Former Kilkenny hurler dies after bike struck by tractor
2 Nine more deaths from Covid-19 recorded in Ireland along with 24 new cases
3 Hundreds protest outside US embassy in Dublin over George Floyd death
4 Green Party’s Catherine Martin confirms she will stand against Eamon Ryan
5 Pubs reopening will not mean ‘fellas having a few pints and peanuts’, Holohan warns
Real news has value SUBSCRIBE