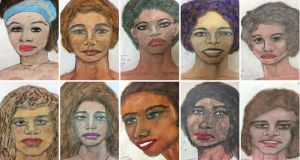 Drawings released by the FBI by Samuel Little, based on his memories of some of his female victims from locations spread across the US. Photograph: HO/AFP/Getty Images

The inmate who claims to have killed more than 90 women across the United States is now considered to be the most prolific serial killer in country’s history, the Federal Bureau of Investigation said.

Samuel Little (79), has confessed to 93 murders, the FBI said. The agency said in a statement that it had verified 50 of the killings and that it believed “all of his confessions are credible.”

Now the FBI is looking for help identifying the rest of his victims, a task it says is all the more urgent because of Little’s age, poor health and sometimes faulty memory.

Over the weekend, the agency asked for assistance from the public after releasing five sketches that Little had drawn of women he claimed to have killed, with information about where he met each one.

After Little was approached seeking information about 18 months ago, he has confessed crimes to numerous prosecutors and police officers who have flown to the California prison where he is serving consecutive life sentences for three murders from the 1980s. Prosecutors say they have closed dozens of homicide investigations dating back nearly five decades, some of them cases they feared would never be solved.

“For many years, Samuel Little believed he would not be caught because he thought no one was accounting for his victims,” Christie Palazzolo, an FBI crime analyst, said in a statement. “Even though he is already in prison, the FBI believes it is important to seek justice for each victim – to close every case possible.”

Little has been convicted of at least eight murders, including several he has confessed to. Prosecutors around the country are still weighing whether to formally charge him for killings; it was uncertain how many charges he will ultimately face. No one representing Little could be reached for comment.

Gary Ridgway, the Green River Killer, was convicted of 49 murders in Washington state during the 1980s and 1990s, the highest number of murder convictions for an American serial killer. Little was arrested dozens of times for crimes including armed robbery, rape and kidnapping as he travelled around the country, drifting through poor neighborhoods and transient communities. But until 2014, he served fewer than 10 years in prison, avoiding a murder conviction.

In addition to his prison cell conversations with law enforcement officials, Little has drawn dozens of detailed portraits of his victims, sketching them in chalk pastels. Over 45 years, he targeted marginalised women, including prostitutes and drug users, the authorities say. Most of them were African American. He often knew only their first names, or nicknames.

The FBI noted that many of the deaths of Little’s victims had originally been ruled as overdoses or from accidental or unknown causes. In other cases, the women went missing and their bodies were never found, but their cases drew little attention.

While Little has offered many details, investigators fear that his memory is becoming not entirely reliable. He is often fuzzy on the year a killing took place. That can make matching his version of events to local police records challenging – and help from the public even more essential, according to investigators.

Among the five new sketches released to the public, one depicts a transgender woman named Marianne that Little met in Miami in 1971 or 1972. Little said she was 18 or 19 years old and they met at a bar. He offered her a ride home in his gold Pontiac LeMans, then drove to what might have been a sugar cane field near Highway 27, where he killed her, according to the authorities.

In a series of videotaped interviews with Little from a prison cell that were released by the FBI this week, Little became visibly excited as he discussed the killings. Asked by a detective about a woman he said he killed in North Little Rock, Arkansas, in 1994, Little responded: “Oh, man, I loved her. I forget her name. Oh, yeah. I think it was Ruth.”

The flood of confessions came after James Holland, a Texas Ranger who specialises in cold cases, sought out Little last year. “Nothing he’s ever said has been proven to be wrong or false,” Holland told 60 Minutes in a segment that aired Sunday night. “We’ve been able to prove up almost everything he said.” In the videotaped interviews released by the FBI, Little spoke about the killings as if they were ordinary events, frequently interrupting his stories with smiles and laughter. His recollections were full of detail, often including the names of streets and the clothing of his victims. He has expressed no remorse.

“‘God put me on Earth to do what I did. He made me,’” Michael Mongeluzzo, a detective from Marion County, Florida, recalled Little telling him. – New York Times