Democrats must plot next move as Trump defies inquiry

America Letter: President’s obstructionism may itself be article of impeachment charge 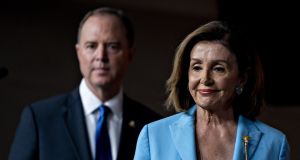 The battle between the White House and Congress over the ongoing impeachment inquiry intensified this week as the Trump administration stepped up its efforts to resist congressional demands.

In the early hours of Tuesday morning, just hours before America’s ambassador to the European Union, Gordon Sondland, was due to testify before three House committees, the White House phoned his lawyers and vetoed his deposition.

Denouncing the move as obstruction of Congress, chairman of the intelligence committee Adam Schiff also claimed that Sondland had handed over a personal device with email or text messages relevant to the inquiry to the state department which were now being withheld. It subsequently issued a subpoena to Sondland to appear on October 14th.

Later that day, the White House sent an extraordinary eight-page letter to House Democratic leaders, effectively shutting down any further co-operation with Congress.

Claiming that Democrats were trying to “overturn the results of the 2016 election and deprive the American people of the president they have freely chosen”, the letter blasted the impeachment inquiry as “partisan and unconstitutional”.

It claimed that the president had been denied the opportunity to cross-examine witnesses, receive transcripts of testimony and “other basic rights guaranteed to all Americans”. For these reasons the president and his administration would not be participating in the inquiry.

In many ways the letter is the apotheosis of Donald Trump’s strategy since the impeachment inquiry was launched. Trump has defiantly dismissed the process as a partisan witch-hunt, denouncing it as a “kangaroo court” just hours earlier.

Trump’s strategy is not unprecedented. Bill Clinton similarly characterised his impeachment as a politically motivated partisan attack – building on Hillary Clinton’s famous claim that there was a “vast right-wing conspiracy” out to get her and her husband. But though Clinton’s team tried to block testimony and access to documents, Clinton co-operated with the impeachment inquiry, agreeing to testify under oath.

Trump’s defiance raises questions about the Democrats’ next move. Technically, the Democratically controlled House has a range of responses at its disposal. There has been talk in recent days of Congress exercising its power of “inherent contempt”.

This gives Congress power to compel non-co-operating witness to comply – essentially by arresting them, though in reality the extreme rule is dormant and has not been invoked since the 1930s. Congress also has the power to impose fines if subpoenas are ignored. It can issue more subpoenas – as it did on Thursday – and hold individuals in contempt if they do not comply, ultimately taking the matter to court.

But all of these avenues, though legal, take time, a luxury Democrats do not have as they seek to move quickly with impeachment, at the very least before next year’s presidential election.

What is more likely is that the Trump administration’s persistent refusals may themselves form an article of impeachment charging Trump with obstruction of Congress.

Nonetheless, Democrats are in no hurry to begin the impeachment trial itself. One of the central arguments of the White House letter is that there has been no formal vote in the House to begin impeachment.

“In the history of our nation, the House of Representatives has never attempted to launch an impeachment inquiry against the president without a majority of the House taking political accountability for that decision by voting to authorise such a dramatic constitutional step.”

Although in terms of historical precedent this is true, there is no constitutional requirement to have an impeachment vote to begin an inquiry.

Though some Democrats have urged speaker Nancy Pelosi to move forward immediately with impeachment, arguing that evidence such as the July 25th phone call between the president and his Ukrainian counterpart is sufficient, the reason for delay may be strategic.

Democrats may be seeking to uncover more damaging information against Trump than his request to Zelenskiy to investigate his Democratic rival Joe Biden, to build a stronger case if the impeachment goes to trial in the Senate. In that case, some Republican senators will feel that they have no choice but to convict the president.

Similarly, though the White House is goading the House leadership to hold a vote, in private many Republican members of the House are wary of being forced to publicly vote on impeachment articles at this point.

Though senior Republicans have backed Trump, there has been a notable absence of pro-Trump members of Congress actively defending the president of late. Many lawmakers may be quietly biding their time until they have more information about the president’s actions.

With opinion polls this week showing a small rise in public support for impeachment, they may be hedging their bets.