Hong Kong reveals 750 children have been arrested amid unrest 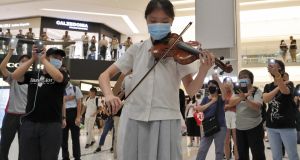 Hong Kong officials have revealed that 750 of the protesters arrested during four months of unrest in the city are children, sparking outrage as anger continues to grow over the government’s increasingly hardline measures against demonstrators.

The semi-autonomous city’s number two official Matthew Cheung said at a press conference on Thursday it was “shocking and heartbreaking” that 750 out of the 2,379 people arrested – or just more than one-third – since June were under 18, and 104 were under 16.

Mr Cheung appealed to parents and teachers to admonish youngsters and tell them to refrain from “illegal or violent acts” and avoid getting injured or arrested, something that would “end up destroying [their] future”.

The high proportion of children arrested sparked outrage in the local community.

“[The government] says this is ‘heartbreaking’ but doesn’t ask why. Youth is rising up. They know they’re fighting for their future against a dictatorial regime,” said Kong Tsung-gan, an author and well-known blogger, on Twitter.

“Totalitarianism is going to destroy our next generation, resist!” wrote another person on Twitter.

A growing number of children have been arrested or injured in the increasingly violent and radical protests in recent weeks.

A Hong Kong policeman fired at an 18-year-old high school student’s chest during heated, territory-wide protests on China’s National Day on October 1st, while a 14-year-old was shot in the thigh by a plainclothes police officer last Friday during protests against a ban on masks. An 11-year-old was also sent to hospital after sustaining an injury in a recent protest.

Ms Lam announced last Friday that the government had invoked the Emergency Regulations Ordinance to pass a regulation forbidding the use of face masks. There are widespread fears that the government would introduce more draconian measures to suppress civil freedoms.

While Ms Lam said she cared “deeply” for students, she said they should not participate in violent attacks and the mask ban was aimed at “helping parents, teachers and students recognise that they shouldn’t be engaged in these acts”.

Schools across Hong Kong required parents to sign a notice saying they understood masks should not be worn inside or outside school.

“When [young people] are on the streets fighting selflessly, they are called ‘criminals and rioters’,” said Kenneth Chan, a political science professor at Hong Kong Baptist University. “The gap between the young people and the officials is impossible to bridge now.

“It is a total breakdown of trust between the government and young people. It can only get worse because Carrie Lam has nothing but harsh measures to suppress and intimidate the young people and their parents.” – Guardian