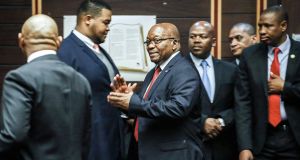 Former South African president Jacob Zuma will stand trial on corruption charges relating to a $2 billion (€1.81 billion) arms deal after a high court on Friday denied him a permanent stay of prosecution.

The ruling by Judge Jerome Mnguni in Pietermaritzburg paves the way for Mr Zuma’s long-awaited trial to start on October 15th.

Mr Zuma, in office from 2009-2018, had applied for a permanent stay of prosecution on 18 charges of fraud, racketeering and money laundering relating to a deal to buy European military hardware for South Africa’s armed forces in the 1990s. He denies wrongdoing.

In May, his lawyers argued the 77-year-old had been treated unfairly by prosecutors and was a victim of a politically motivated witch-hunt.

On Friday, Judge Mnguni dismissed an application by Mr Zuma and his co-accused, French arms dealer Thales, to have the charges set aside permanently with costs. This means they will pay legal costs related to the application and hiring lawyers.

Thales said it was reviewing the judgement with its lawyers and would assess its legal options.

Mr Zuma and Thales have 15 days to appeal.

The charges against Mr Zuma were originally filed a decade ago but then set aside by the NPA shortly before he successfully ran for president in 2009.

After his election, his opponents fought a lengthy legal battle to have the charges reinstated, finally succeeding in 2016. Mr Zuma countered with his own legal challenges.

The official opposition party, the Democratic Alliance (DA), which has been at the forefront of the legal fight, welcomed the decision, saying: “We are encouraged by the ruling of the court to believe that Zuma will eventually have to face his day in court.

“The DA will not rest until justice has been done.” – Reuters

1 Harry and Meghan will no longer be working members of British royal family
2 Campaigning continues as poll puts Fianna Fáil 12 points ahead of Fine Gael
3 Mary Lou has to call for the smelling salts as SF councillor deals a knock-out blow
4 Who was murdered teenager Keane Mulready-Woods?
5 Dublin gangland figures involved in Drogheda feud that killed 17-year-old
Real news has value SUBSCRIBE