Kurds and US gave Turkey excuse it needed to invade

US backing made the Kurds in Syria overconfident. They are set to pay a high price 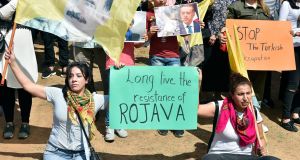 Kurdish protesters in front of the United Nations Building in Beirut, Lebanon, on Friday, demonstrating against the ongoing Turkish military operation in Northern Syria against Kurdish forces. Photograph: Wael Hamzeh/EPA

Syria’s Kurds, numbering up to 2.5 million, are destined to be hampered by geography as the majority live south of the border with Turkey, which has repressed its own Kurdish population since the emergence of the modern state in 1923.

Any assertion of Syrian Kurdish ethnic identity, political organisation or armament is regarded as a threat by Turkey, which fears this could encourage its own rebellious Kurds to step up their three-decade insurgency.

Turkey launched its military offensive in Syria as soon as US president Donald Trump stated he would not defend the US-allied Kurdish People’s Protection Units (YPG), regarded by Turkey as a terrorist organisation formed by Turkey’s Kurds.

The YPG, the paramilitary wing of the secular, socialist Kurdish Democratic Union, had no choice but to fight the radical, fundamentalist Islamic State, which had invaded northeastern Syria.

The Syrian army was in no position to protect the border zone and left this to the Kurds. The YPG also had no option but to partner the US, which provided training, arms, advisers and air cover for Kurdish operations.

Turkey repeatedly warned Washington against allying with the Kurds, although the Kurdish fighters constituted the most effective non-state paramilitary force in Syria.

Turkey has used the fact that the Kurds are armed as a pretext for the offensive in spite of the fact that the YPG had never attacked Turkish territory, and joint monitoring of the border by Turkish and US forces could have continued as long as the US and European allies maintained a few hundred troops in north-eastern Syria.

Turkey’s second pretext, the presence of a Kurdish entity along the border with Syria, was gifted by both the Kurds and the US. The risks this entity poses might have been minimised if Turkish complaints had been heeded.

Instead, the Kurds dubbed the border Zone Rojava, or Western Kurdistan, and set up a semi-autonomous administration that they dominated, even though the majority of the population was not Kurdish.

Portraits of Turkey’s imprisoned Kurdish rebel leader Abdullah Öcalan adorned public buildings, which flew the Kurdish flag rather than the banner of Syria. Under US direction, the YPG also seized control of Syria’s main oil fields and swathes of Raqqa and Deir al-Zor provinces, where there are few Kurds.

Rojava was a red flag to Turkey, which rejects a second Kurdish entity on its borders; the first is Iraq’s semi-autonomous Kurdish region. Syrian Kurds should also have been alerted by Baghdad’s insistence that Iraqi Kurds cancel their 2017 declaration of independence and by the Iraqi army’s reoccupation of areas adjacent to the Kurdish region seized by Kurdish militiamen during the campaign to defeat Islamic State.

US backing made Syria’s Kurds overconfident. From time to time they negotiated with the Syrian government but refused its terms for the return of the northeast to its control.

In any case, Washington rejected this possibility. Syria’s Kurds are set to pay a high price. In addition to Turkey’s invasion, Syria’s deputy foreign minister Faisal Maqdad has accused the Kurds of betrayal and rejected dialogue.

Taoiseach had ‘no idea’ Barry Cowen was convicted of drink driving