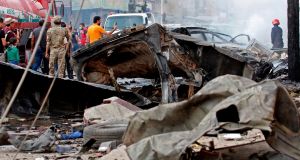 People gather at the site of an explosion in the northeastern Syrian Kurdish city of Qamishli on Friday. Photograph: Mohammed Ahmad/AFP via Getty Images

Kurdish civilians have been fleeing key towns in northeastern Syria as Turkish forces continue to bombard targets for a third consecutive day.

US president Donald Trump has also raised the possibility of imposing sanctions on Ankara. There were reports on Friday of air strikes and shelling in Ras al-Ayn and Tel Abyad, the Kurdish-held towns that have borne the brunt of the fighting, as Turkish ground troops and their allies sought to close in on both.

Thousands of civilians have fled from both towns as well as surrounding villages, and a camp of at least 4,000 displaced Syrians near Ras al-Ayn has been evacuated after Turkish artillery landed nearby, Kurdish administrators said.

Turkey’s vice-president said on Friday evening that his country’s troops had advanced 8km into northeastern Syria.

Kurdish activists reported at least one car bomb explosion outside a popular restaurant in the town of Qamishli on Friday afternoon, amid fears that Islamic State might use the fighting to launch its own attacks. A Kurdish media collective, the Rojava Information Centre, said one person was killed and no group has yet claimed responsibility.

Tel Abyad’s hospital was closed after most of its staff left, Médecins Sans Frontières said. “Our staff in Tel Abyad witnessed the town, that was once filled with life, become deserted,” said Robert Onus, the group’s emergency manager for Syria.

The US defence secretary, Mark Esper, told his Turkish counterpart to halt the offensive or risk “serious consequences for Turkey”, but it is unclear what effect that would have on a government in Ankara that believes it has the backing of the US president.

The Turkish Armed Forces, together with the Syrian National Army, just launched #OperationPeaceSpring against PKK/YPG and Daesh terrorists in northern Syria. Our mission is to prevent the creation of a terror corridor across our southern border, and to bring peace to the area.

“As part of the call, Secretary Esper strongly encouraged Turkey to discontinue actions in northeastern Syria in order to increase the possibility that the United States, Turkey and our partners could find a common way to de-escalate the situation before it becomes irreparable,” a Pentagon account of the call said.

About 64,000 people have fled Syria since the campaign began, according to the International Rescue Committee aid group. The Kurdish Red Crescent said on Thursday night that 11 civilians had been killed in the fighting, including an 11-year-old boy in Qamishli.

Clashes were reported overnight at different spots along the border, from Ain Diwar at the Iraqi frontier, to Kobane, more than 400km to the west.

Kurdish officials in al-Hawl camp, where about 400 guards watch over more than 60,000 female members of Islamic State (Isis) and their children, claimed there were violent demonstrations on Friday morning which they characterised as a failed escape attempt. Such unrest has been frequent in the camp in recent months.

The reports of the fighting, as well as concerns over the fate of about 11,000 detained Isis fighters and their families fuelled criticism of the Turkish offensive in Washington, where the president is under increasing pressure to lay down red lines for Ankara.

Mr Trump’s abrupt decision last Sunday to clear US soldiers from the Turkish-Syrian border in effect gave Turkey a green light to attack the US-backed and Kurdish-dominated Syrian Democratic Forces (SDF). It has led to withering criticism from his allies in Congress, the evangelical movement and Israel.

Mr Trump said on Thursday that he hoped he could mediate between Turkey and the SDF but kept open the possibility of doing “something very, very tough with respect to sanctions and other financial things” against Ankara.

The French foreign minister, Jean-Yves Le Drian, has called for an emergency meeting of the coalition of more than 30 countries created to fight Isis. France’s European affairs minister said next week’s EU summit would discuss sanctions on Turkey over its action in Syria.

The SDF remained in control of the camps and prisons holding Isis detainees and their families, a US state department official said.

Turkish defence officials claim their forces have killed 277 Kurdish militants, a figure that could not be verified. They have confirmed the death of two soldiers, the latest on Friday afternoon. – Guardian