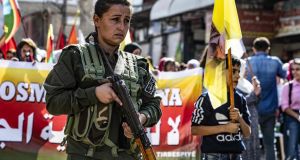 A members of the Kurdish Internal Security Police Force of Asayesh stands guard as Syrian Kurds demonstrate against Turkish threats to launch a military operation on their region, in the town of Al-Qahtaniyah on Monday, Photograph: Delil Souleiman/AFP via Getty Images

US president Donald Trump’s abrupt decision to give a green light to Turkey to invade and occupy a wide band of Kurdish held-territory in northern Syria risks bitter fighting in that war-torn country.

Ankara argues the Kurdish People’s Protection Units (YPG), which has defeated Islamic State, is a threat to Turkey as it is connected to Turkey’s separatist Kurds, who have been in conflict with the Turkish state since 1984.

The YPG has vowed to defend its villages, towns and cities. The Kurds have in recent months received a steady supply of US arms and vehicles enabling them to resist. They may not, however, prevail against Turkish aerial bombing and shelling from artillery across the border.

The Kurds said on Monday that US troops had withdrawn from border areas with Turkey. Syria’s Kurds are a minority in this area, which is populated by Armenians, Assyrians and Arabs, who fear they could be ethnically cleansed to make way for three million of 3.6 million Syrian Arab refugees that Turkey no longer wants to host.

After seizing the Kurish-majority Afrin district in early 2018, the Turks expelled half its inhabitants and brought in jihadi Arabs from elsewhere. A repeat would amount to “Arabisation” of a mixed area as well as the destruction of its US-fostered administration.

The administration would be replaced by a regime dominated by Ankara, which intends to deploy surrogate Syrian fighters to control the occupied zone. Displaced civilians would be driven into government-held Syria, which is overburdened by homeless people and impoverished by sanctions.

If fighting erupts, the Kurds could abandon prisons and detention camps holding thousands of Islamic State fighters and families, allowing them to flee into the desert to join comrades still at arms. While Turkey has pledged to take over these facilities, hundreds of detainees could have escaped by the time its forces arrive.

Some 30,000 Islamic State and affiliated fighters are estimated to remain in Syria and Iraq. The Kurds, who have provided the most effective local forces in the battle against Islamic State, could not be expected to take part in quelling these fighters after being abandoned.

Turkey’s invasion would exacerbate tensions with Russia, which has complained that Ankara has not met last year’s commitments to disarm and demobilise jihadi groups in northwestern Idlib province, which is supposed to be a deconfliction zone.

Moscow is unlikely to use air force assets based in Syria to counter a Turkish offensive which is certain to strain relations with Nato members other than the US. Desertion of Syria’s Kurds will expose the US as a bad risk as an ally.