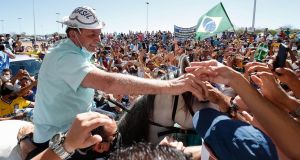 Brazilian president Jair Bolsonaro on a visit to the city of Sao Raimundo Nonato, in the state of Piaui. Photograph: EPA/ Alan Santos

Brazil’s vice-president has defended the response of the country’s leader, Jair Bolsonaro, to the coronavirus pandemic as the Latin American nation approaches 100,000 deaths from the virus.

The far-right president has been heavily criticised at home and abroad for what many public health specialists say is his gross negligence in handling the crisis. For seven weeks Brazil has averaged more than 1,000 deaths a day even as Mr Bolsonaro has campaigned against measures to restrict the pandemic’s spread while promoting medicines shown to be ineffective against Covid-19.

But vice-president Hamilton Mourão defended the administration’s response, blaming political polarisation across the globe for harming the country’s image. “President Bolsonaro is only not compared to Attila the Hun,” he said of a leader with a history of misogynist, racist and homophobic statements. In a video call with correspondents, the former general also dismissed as “absurd” claims the government’s approach to the crisis qualified as genocide.

Mr Mourão highlighted the country’s falling mortality rate and said Brazil’s size and regional diversity meant its handling of the pandemic must be compared to similarly sized states such as the US, Russia and India. Brazil’s rate of deaths per 100,000 inhabitants is much higher than that of Russia and India and is steadily approaching that of the US, the only country to report more deaths overall than it has.

On Monday, World Health Organisation executive director Michael Ryan said the situation in Brazil “remains very worrying”. He said the only solution for countries suffering intense community transmissions such as Brazil was a “strong partnership” between federal and state governments.

Mr Mourão remained silent in an April cabinet meeting in which Mr Bolsonaro defended arming the population to allow it resist quarantine measures by state and local administrations designed to contain the spread of coronavirus.

Last month Mr Bolsonaro tested positive for Covid-19. After claiming last week he was cured of the disease, he toured several states across the country, holding small campaign-style rallies. At one stop the president said he believed everyone would one day catch the virus.

“What are you afraid of? Face up to it!” he told a group of supporters, taking off his mask and posing with children for photographs.

The reproduction rate of the virus in Brazil has remained above one – meaning it is out of control – for the past 14 weeks. But the country’s rate is only the fourth highest in South America behind Peru, Colombia and worst affected Argentina, according to Imperial College in London.

Colombia and Argentina were praised for their initial responses to the crisis but have since seen the pandemic spread rapidly within their borders.