If a pupil tests positive, only their age cohort will be quarantined – not the entire school 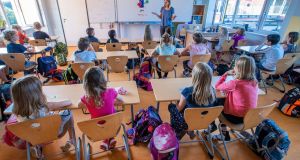 Teacher Francie Keller welcomes the pupils of class 3c in Lankow primary school to the first school day after the summer holidays in Schwerin, Germany, on Monday. Photograph: Jens Buettner/dpa/AP 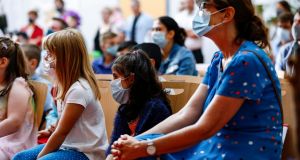 Some 150,000 schoolchildren and 13,000 teachers in the northeastern state of Mecklenburg-Western Pomerania ended their holiday on Monday, entering their classrooms for the first time since March.

Hamburg follows on Thursday while, next week, schools reopen in Berlin, Brandenburg and North Rhine-Westphalia.

The staggered reopening, long a feature of Germany’s decentralised school system, will be crucial, as schools practice hygiene concepts that until now have existed only in theory.

The northeastern coastal state has reorganised classes into age cohorts, with lessons beginning on a staggered basis. As well as a dedicated room, each cohort has its own area of the cloakrooms, toilets, canteen and school yard. Classrooms must be ventilated regularly, and pupils are required to wash their hands regularly and avoid hugging.

If one pupil tests positive for Covid-19, only that cohort will be quarantined and not the entire school.

As one of Germany’s least populated states, Mecklenburg-Western Pomerania has had only 20 deaths of Germany’s total of 9,148 fatalities.

“We came well through the crisis and would like that it stays that way,” said state education minister Bettina Martin, adding she would push this week to make masks obligatory in corridors.

Some states such as Berlin and Bavaria have decided already to make face masks obligatory in school corridors. Other states including Saxony and Hesse have made masks a discretionary matter for individual schools.

Individual schools such as the Carolinum in Neustrelitz, 100km north of Berlin, offered free voluntary Covid-19 tests for its 1,000 returning students returnees.

“It all happened without any big standing around and was remarkably calm,” headmaster Henry Tesch told the local Nordkurier daily.

Around the country, state education ministers and parents are grappling to find a formula that prevents caution tipping into overkill.

Tests for German holidaymakers returning from high-risk countries are to be made obligatory from next week. Before then, with new infections in Germany running at more than 500 daily, some parents are wary about their children sharing a classroom with children back from a holiday in Spain.

Meanwhile a school pupil representative association has criticised face masks as “an imposition” and warned that, in many modern schools, “it’s not possible to ventilate rooms because the windows don’t open”.

Several federal states commissioned scientific studies to check the risk posed by a return to classrooms. One study from the southern state of Baden-Württemberg of 5,042 people – 2,521 children under 10 attending school or Kindergarten and the same number of corresponding parents – found just 64 with Covid-19 antibodies.

Of those, 45 were adults, 19 were children and almost none had shown any sign of infection. The University of Ulm study – based on tests from mid-April to mid-May – was the basis on which the state government in Baden-Württemberg decided to re-open schools.

Prof Klaus-Michael Debatin, one of the researchers, said the study was designed to test whether, with Covid-19, children returning from school or childcare were as likely to spread the infection as was the case with colds and flu.

“With corona, many things seem to be different,” said Prof Debatin on radio. “We found no evidence that children are either particularly receptive to the virus or spread it in their families.”

Last month, a study from Saxony detected a similarly low rate of coronavirus antibodies in 2,045 children and teachers tested in 13 secondary schools.

Just 12 samples collected by Dresden’s Technical University (TU) contained traces of the virus, while 24 participants said they had at least one case of Covid-19 in their household.

The study’s authors said their results indicated the “dynamics of virus spreading have been overestimated” and that schools were unlikely to become infection hotspots.

On that basis, the authors suggested schools would not become a coronavirus “hotspot” after reopening, as had been feared.

“We’re entering the holidays with an immunity rate no different to March,” said Prof Reinhard Berner, a lead researcher in the study, published mid-July. “A silent, symptomless infection among the students and teachers examined by us took place even less often than we thought.”