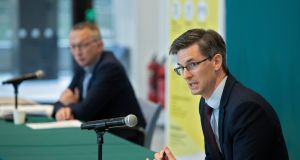 There have been no further deaths related to Covid-19 in the State but 46 new cases confirmed, according to figures released on Monday evening by the Department of Health.

This means the death toll from the virus stands at 1,763 while the total number of cases in the State rises to 26,208.

Last Thursday saw a spike of 85 new cases. This was followed by 38 extra cases on Friday, 45 on Saturday and 53 on Sunday.

“The vast majority of young people in Ireland have followed public health advice and have made very significant sacrifices to protect themselves and others. People of all ages will occasionally slip up as they learn to live safely with this virus.

“We should not seek to attribute blame, but rather continue to encourage one another to build on and sustain the great efforts that we have all made to date.

“We continue to urge everyone to observe the safe behaviours that we recommend such as physical distancing, washing hands regularly, wearing a face covering where appropriate, avoiding crowds and doing all we can to protect each other.”

“NPHET continues to monitor the evolving situation very closely and will meet tomorrow.”

Five cases have been identified as community transmission, and 32 are associated with outbreaks or are close contacts of a confirmed case.

Some 15 cases are located in Co Kildare, eight in Co Laois, seven in Co Clare, five in Co Offaly and the remaining 11 are spread across nine other counties.

The HSE said it working to identify any contacts the patients may have had to provide them with information and advice to prevent further spread.

Earlier, the country’s two main organisations representing vintners issued a fresh plea to the Government to allow pubs to reopen ahead of a key recommendation to be made by public health experts on the issue on Tuesday.

The Vintners Federation of Ireland and Licensed Vintners’ Association called on Monday for the Government to provide a substantial compensation package for the industry if there was any further delays to the resumption of their business.

The National Public Health Emergency Team (NPHET) is due to issue a recommendation to the Minister for Health, Stephen Donnelly, on Tuesday on whether it believes pubs can reopen safely as scheduled on August 10th amid the ongoing Covid-19 pandemic.

To date Mr Donnelly has refused to signal his views on the issue and said he will await guidance from NPHET.

The Government decided last month to postpone the planned reopening of pubs that do not serve food, colloquially known as “wet pubs”, on July 20th as part of Phase 4 of the reopening of the economy following an increase in the number of confirmed Covid-19 infections.

The Vintners Federation of Ireland, which represents over 3,500 publicans outside Dublin, said its members felt they were being used as “a messaging tool” by the Government by keeping their door shut.

VFI, chief executive, Padraig Cribben, said the postponement of the reopening of pubs was placing a huge strain on pub owners, their families and local communities with many publicans “at breaking point”.

Mr Cribben said VFI members felt the Government was using the sector to capture public attention as the Taoiseach, Micheál Martin, had stated on several occasions that keeping pubs shut was designed to send a strong message to the public about avoiding complacency.

The VFI leader said keeping pubs closed was not a viable option given that society was expected to live with the coronavirus for some period to come.

“It is simply unfair to deny publicans the opportunity to trade when every other sector in society is open,” Mr Cribben remarked.

He described the coming week as a “make or break” period for the pub industry.

Mr Cribben added: “It is impossible to overstate the crisis facing the sector that accepted the Government decision to close pubs back in March but now is forced to stand aside as uncontrolled environments such as house parties are allowed to take place. The pub is a controlled and regulated environment where social distancing can be safely maintained.”

Echoing the VFI’s call for pubs to be allowed to reopen, the Licensed Vintners Association, which represents around 600 pub owners in Dublin, said pubs could no longer be left in limbo after being unable to trade for the past 140 days.

LVA chief executive, Donal O’Keeffe, said it was time for the Government to either open the pubs or to provide a “meaningful compensation package”.

Publicans have also criticised the failure of the Government to provide them with guidelines about measures to be put in place to allow pubs to reopen safely.

The LVA pointed out that it was the second time in the space of three weeks that publicans had been left uncertain about whether they could reopen their premises with less than a week’s notice.

Mr O’Keeffe said the lack of clarity meant pubs did not know whether they should have staff lined up to work from next week, order and purchase stock or how to be organising their premises to apply measures that would be contained in yet unpublished guidelines.

“Pubs across the country can’t continue to be left in limbo. It is creating intolerable pressure for publicans, their staff and suppliers,” Mr O’Keeffe said.

He questioned how many times the Government were going to “walk an entire industry up that hill of uncertainty.”

Mr O’Keeffe said the Government could not keep on “kicking the can down the road” when it came to tackling the future of the pub industry.

“Either they are going to let us trade or they won’t. If they won’t they need to come up with a meaningful compensation package for the sector,” Mr O’Keeffe said.

He added: “No other industry is facing this level of insecurity and no other sector has been singled out in a way that the pubs of this country have been.”

The LVA said the vast majority of publicans had shown great responsibility during the public health crisis with pubs all over Ireland supporting the lockdown back in March.

Publicans have expressed concern that the Government’s focus on reopening schools at the end of August may result in a further delay to the planned reopening of pubs.

Speaking on RTÉ’s This Week on Sunday, Mr Donnelly said public health officials had told him that the international experience showed that the number of new Covid-19 cases increased when pubs were allowed to reopen.

Refused to be drawn about his views on whether pubs could reopen on August 10th, Mr Donnelly said the State’s priority was to have schools reopen at the end of the month.

“So I don’t want to prejudge what NPHET may decide,” the Minister added.