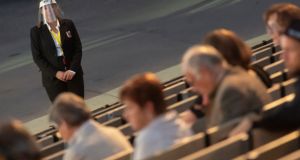 A security official wearing a protective face shield during a rehearsal at the Domplatz square in Salzburg. Photograph: Christian Bruna/EPA

The curtain rises on Saturday on the Salzburg Festival, but not for the centennial celebration the Austrian city expected.

That a festival is being held at all amid the worldwide Covid-19 pandemic has surprised some and delighted others. Festival organisers say they have worked hard on a concept that could provide a blueprint for others.

“We carry a great responsibility,” said festival president Helga Rabl-Stadler. “If things go well with us then the way is clear for others. We will be watched by the entire cultural world.”

The festival was conceived in 1920 by two theatre legends – director-impresario Max Reinhardt and novelist-poet-librettist Hugo von Hofmannsthal – as an open and more democratic antidote to the more exclusive festival in Bayreuth.

While that focused exclusively on the operas of Richard Wagner, Reinhardt and von Hofmannsthal insisted Salzburg would be more inclusive and offer “from everything, the best”: straight plays, opera and concerts.

The last century has seen Salzburg attract the world’s greatest creative names and, in recent years, up to 200,000 visitors annually. The festival is a massive economic factor in the city alongside cultural tourism linked to Mozart, born in the city in 1756, and The Sound of Music, shot there in 1964.

On offer this year: a new play by controversial Nobel laureate Peter Handke; a new production of Richard Strauss’s Elektra and the usual open-air production of von Hofmannsthal’s Everyman. The play, in which Death pays a prosperous man an unexpected visit, may have extra resonance with the audience in these pandemic times.

Organisers insist they will be rigorous with health measures: masks for all visitors, though not in their seats; one-metre social distancing; no intervals or toilet breaks; personalised, electronic tickets only. The total number of performances has been cut in half to 100, performers have been tested regularly for the virus and reduced audiences in venues will be seated in a chess-board pattern.

“Great as the joy is to enable the shared experience of art at the Salzburg Festival, the health of all those involved takes precedence,” said festival director Lukas Crepaz. “We will comply painstakingly with all regulations . . . and exceed them if we consider it necessary.”

Not everyone is convinced, particularly politicians in neighbouring Bavaria. They decided to cancel the Bayreuth festival this year for the first time since the Nazi era.

“It’s certainly adventurous to hold the [Salzburg] festival,” said Florian Hermann, Bavaria’s state minister for culture and media. “I can only hope that it doesn’t lead to greater difficulties.”

But the opulent programme has prompted considerable blow-back, too. The influential Süddeutsche Zeitung daily accused the festival organisers of having “created the illusion that the plague is over”, adding: “It appears like a relaxed shrug of the shoulders towards other less courageous festival programmers.”