Coronavirus experience shows how Greece’s weakness is its sunshine

Greece Letter: If Greece were Finland, the threat to its economy would be minimal 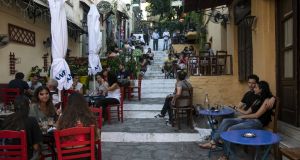 In case you’re wondering, yes, “pandemic” is a Greek word, meaning “affecting all the people”. Which is one reason why Greece has taken the Covid virus so seriously, and with such success.

The disparate responses to coronavirus among EU member states and, of course, worldwide, suggests that each state responds according to its weaknesses, needs, fears and external influences.

It would be unrealistic for an EU summit to attempt to impose rules on social distancing in every member state, but the lack of a unanimous, unified EU policy on the virus means there are no universal European rules about inter-state travel, testing for infection or contact tracing, leading to widespread confusion about what is permitted or even advisable.

It is notable that the European country that was most successful in restricting Covid should be one of the most at risk once the gates were opened. However cautious the authorities have been, the inevitable – and foreseen – increase in infections has underlined the dilemma.

In Greece, once the airports opened from July 1st onwards, at least 50 per cent of infections were identified at points of entry. In Corfu, where I live, the numbers infected went from 0 to 29 during July; the carriers were Serbs, Bulgarians, British, German and French. The rates on the single land border with Bulgaria were so high that Greece insisted that anyone presenting themselves at that point must show a negative test conducted within the previous 72 hours. Serbian visitors were banned absolutely.

So sharp was the rise in infections in the last week of July that a return to the familiar restrictions is contemplated. Masks are now mandatory in all confined public places.

The pandemic has demonstrated the narrow line between xenophilia (the natural courtesy towards guests) and xenophobia (fear of what the foreigner might bring). It has also shown the difference between patriotism and nationalism. One appeals to a sense of responsibility and loyalty; the other to a sense of identity and security.

The term “pandemic” applies not only to Covid and other destroyers of life and liberty: as an adjective, it reflects the ultimate aspirations of the EU: to embrace all people within its remit in the same egalitarian and inclusive way of life. In this, Covid has shown how deeply it has failed.

With the Netherlands, Denmark, Sweden and Finland (the “frugals”) opposing the proposed financial package at July’s EU summit, and Hungary and Poland giving cause for concern over the “rule of law”, the southern states most hit by the virus, in terms of tourism – Spain, Italy, Greece and Croatia – run the risk of being ignored in both political and financial terms. Meanwhile, non-EU states such as Turkey see themselves as exempt from any common approach to a universal problem. “Covid” simply means different threats and opportunities depending on where you sit.

There is a massive division between those who espouse “do as you would be done by” and the Nimbies (“not-in-my-backyard”). Every country protects itself but also yields to its weaknesses. Greece’s weakness is its sunshine. If Greece were Finland or Greenland, the threat to its economy would be minimal.

Meanwhile, another kind of “nimby” manifested itself in Corfu, where huge local protests were voiced when prime minister Kyriakos Mitsotakis personally endorsed an embryonic exclusive tourism resort during a visit to the island. Despite opposition by the local authority, public opinion and wealthy local landowners including the Rothschild family, the government actively supports the project by US-based NCH Capital on the deserted, pristine headland of “Erimitis”.

It’s an example of the need for Greece to attract foreign investment, in this case at the cost of diminishing the unique ecosystem of the area. Erimitis contributes nothing to the national economy except its beauty and tranquillity. So in terms of productivity, it’s a waste of space.

Thus it also highlights the eternal debate in Greece between the need to modernise and to capitalise on its assets, and the issue of identity and what constitutes “Greekness” for both the country and its people, their culture and their traditions.

Almost every year, those responsible for developing tourism policies declare the end of “mass tourism” – resorts and cruise ships being the most obvious examples – and every year more resorts are built and more cruise ships are accommodated. A self-contained resort, like that planned for Erimitis, or a cruise ship docking in Corfu for less than 24 hours, contribute almost nothing to the local economy.

The other options – the much vaunted development of niche markets such as wine and food tours, festivals of literature, film and music, ski slopes, diving schools, or hill-walking – don’t get the support or encouragement at national level that they need to enter the international tourism market. Highlighting skills in cuisine and viniculture, visual arts, music and handcrafts could not only enhance Greece as a tourist destination but open markets worldwide.