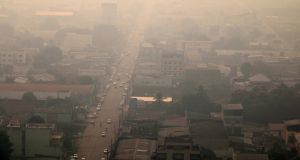 A general view over smoke from fires in the Amazon rainforest covering the city of Porto Velho, Rondonia, Brazil, on August 16th. Photograph: Roni Carvalho/EPA 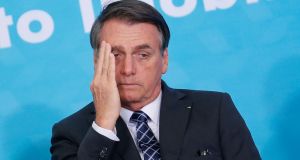 Brazil’s nationalist president Jair Bolsonaro said on Thursday his government lacked the resources to fight and investigate wildfires in the Amazon after satellite images showed swaths of rainforest burning at an unprecedented pace, prompting anger at his stewardship of the environment.

Speaking in front of reporters in Brasília, Mr Bolsonaro said the government was investigating the fires and suggested that non-governmental organisations may have been behind them.

“It could be ranchers. Everyone is suspicious, but the biggest suspicion comes from NGOs,” Mr Bolsonaro said. He added that he had “no proof” to back up his claims but pointed out that his government had slashed funding to charities.

According to government data, the number of fire outbreaks so far this year has reached more than 74,000, up 84 per cent from the same period last year and the highest since records began in 2013.

Mr Bolsonaro, who wants to open up the Amazon for commercial activity, scoffed at environmentalists’ concerns about the destruction. “I used to be called Captain Chainsaw, now I am Nero, setting the Amazon aflame,” the president said.

Alberto Setzer at INPE, Brazil’s space agency, which tracks rainforest clearing via satellite imaging, told local media the fires had been caused by humans. “They are all of human origin, some purposeful and some accidental, but always by human action,” he said.

In the past, Mr Bolsonaro has attacked INPE, disputing its deforestation data.

The smoke from this week’s fires, which are not restricted to the Brazilian Amazon but are also happening in Brazil’s Cerrado savannah as well as neighbouring Bolivia and Paraguay, was captured by a Nasa satellite from space and blanketed the skies of some cities.

“Although it is not unusual to see fires in Brazil at this time of year due to high temperatures and low humidity, it seems this year the number of fires may be record-setting,” the US space agency said in a note.

While fires are common in the dry season, environmentalists blame this year’s blazes on farmers illegally clearing forests for cattle and agricultural land use.

“This devastation is directly related to President Bolsonaro’s anti-environmental rhetoric,” said Christian Poirier, a director at Amazon Watch, a non-profit organisation that aims to protect the rainforest. “Farmers and ranchers understand the president’s message as a licence to commit arson with wanton impunity, in order to aggressively expand their operations into the rainforest.”

Experts see Brazilian rainforests as a bulwark against rising temperatures, and critics argue that Mr Bolsonaro’s pledges to open up reserved areas for development while rolling back environmental protections would further embolden loggers, wildcat miners and ranchers keen to profit from deforestation, which has accelerated.

In July alone, 2,253sq km were destroyed in Brazil’s portion of the jungle, a huge leap from 597sq km in July 2018, INPE said. The July logging has been followed by widespread burning in August. – Copyright The Financial Times Limited 2019