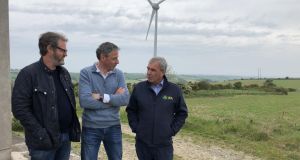 Four pioneering farmers have cleared a series of planning and other hurdles to establish solar farms on their land. But delays in the introduction of a new Government energy auction system are jeopardising their development.

The farmers are approved by the State for contracts to deliver electricity, and yet they have no clarity on when they can move to complete construction and switch on generation. They fear their efforts will come to nought as planning permission risks expiring before they get the go-ahead.

The four – Michael Quirk from Cloyne, Co Cork, Joseph Hennessy and James Keogh from outside Enniscorthy, Co Wexford, and Peter Dunne from Co Louth – have joined forces by virtue of being approved solar developers. Areas near the east and southern coastlines are considered prime areas with solar potential in Ireland.

“We all have similar 5-megawatt [MW]projects on our land,” Quirk explains, with grid connection points on site or nearby.

They have been working on their projects since 2014 and have spent substantial amounts of money. They want to be involved in an imminent renewable energy revolution and to help peers embrace solar, thereby putting in a cornerstone towards long-term viability for family farms.

What followed after the initial process was a vacuum, Quirk adds. Then they got through planning.

“They [Government departments and State agencies] never expected people like us to end up shovel-ready by now. We feel the solar story has become one of massive projects, developed by massive offshore private equity players. Our projects are as shovel-ready as any but we feel we are not recognised in the decision-makers’ minds.”

Hennessy underlines time constraints on them, as planning permission has to be activated by a certain date, ie by which time plants have to be built.

“If we can be seen to get off the ground, more will follow . . . using more land for solar, farming it themselves and securing their future.”

He wants to give something back to his family’s beef and tillage farm run with three brothers and his father. Hennessy is an engineer, who also works as a consultant on renewables technology.

The Quirk farm at Crocane near Cloyne, close to Cork harbour, already has a 1.7MW wind farm. The solar facility is earmarked for a large south-facing field, beside the windfarm built in 2011 consisting of two 55-metre high turbines (now considered small), exporting about 1.9MW onto the grid nearby.

Quirk explains it was built with no local resistance, no planning objections (“not that we are negative people”), which adds to his frustration in trying to embrace solar options. With a reasonable offer, his latest venture could be installed within months.

The renewable energy industry in Ireland is at a crossroads. This is the final chance for farmers to get involved

The Renewable Electricity Support Scheme (RESS) is the key Government policy mechanism to drive increased use of renewables. Its auction process to finalise contracts was due to start in 2018 but it looks like first-tranche offers will be in 2020.

In 2014, the Green Paper on energy placed major emphasis on “energy citizens” and empowering communities wishing to embrace renewables.

“We four are the only people capable of delivering this [in the farming context],” Quirk says. “The renewable energy industry in Ireland is at a crossroads. This is the final chance for farmers to get involved.”

The Government’s Climate Action Plan says up to 1.5 gigawatts of grid-scale solar energy will be built, backed by a new system of competitive auctions “where the lowest-cost technology will be determined”.

Offers are expected to be processed in the second half of 2020, it adds, while the Commission for Regulation of Utilities is reviewing requirements to facilitate an increase in renewables from wind, solar and batteries. The plan reiterates a focus on “community gain arrangements”, but there is little else to reassure the farmers.

The four farmers claim they risk being cut out of the first round of auctions or not being able to compete with large solar developers with economies of scale if they are not ringfenced – ie some portion is allotted for smaller operators. They are competing with developers with hundreds of millions of euros and landbanks of hundreds of hectares.

“There is nothing in the climate action plan to reassure us,” Quirk adds.

His view is supported by IFA renewables committee chairman Tom Short. If there is no local dimension, “then the whole of the solar sector may as well be handed to the corporate sector”, he contends. “If it was balanced right, it would be a good news story for much of rural Ireland.”

Quirk says it is a battle between global business and local endeavour when farmers have difficulties, especially as “the beef game is up”. He accepts big players have to be part of the first round. “But we do not have an option of sending in speculative bids . . . We wanted to be ring-fenced.”

Hennessy says he expected the Government would have supported the farmer-led solution first when farmers, notably in beef and tillage, are struggling. There is “no downside”: it reduces carbon emissions with simple proven technology at little cost. Yet, in effect, they were told that, under RESS, “we will deal with you later”.

Quirk believes the Government is planning for solar plants of 100 to 300 acres – a completely different business that will turn people off participating in energy communities, especially in rural areas. The philosophical approach was supposed to be: local power in local areas for local people – “an easy story to sell compared to 200 acres of glass coming into your area” and transporting power to Dublin rather than distributing it locally.

The approach goes against the family farm model in favour of a factory model of production. What’s more, there is no crowdfunding option in Ireland to help fund one-off people like him – the only EU country without such a model.

“It’s almost as if we have to create our own ecosystem.”

A spokesman for the Department of Climate Action and Environment said that, as the RESS is subject to detailed consultations with the European Commission, pending State aid approval, “it would be inappropriate to speculate on individual projects at this time. As outlined, however, the objective of the scheme is to deliver technology diversity within the applicable State aid guidelines.”

The spokesman continued: “The Minister [Richard Bruton] acknowledges solar and other renewable technologies show potential in terms of competition and driving down prices for electricity consumers.” This was reflected in targets set out in the climate plan.

“It is premature to speculate on the likely outcome of an auction scheme that has not yet opened. The terms and conditions of the RESS auctions will set out the process by which all competing technologies, including grid-scale solar farms, connect and receive support for supplying energy to the national grid,” he said.

The qualification process for the first RESS auction will be open for applications in late 2019, while decisions on the solar developers are a matter for the Commission for the Regulation of Utilities, the independent energy regulator, he said.

If you create a vacuum, big business will step in, and we will all have a race to the bottom

Quirk is fortunate, having secured funding approval from Triodos Bank, one of the world’s leading sustainable banks, which supports ventures of environmental or social benefit.

He is involved in Aghada District Community Council, but, he says, its members invariably say to him: “Listen . . . it took you 12 years to build a windfarm, why should we support you [in building a solar farm]?”

“People in the community won’t invest in things that take years to happen. If you create a vacuum, big business will step in, and we will all have a race to the bottom,” he predicts.

Short says time for Government talk is over. Farmers need to be part of fair auctions backed by capital grants, and gestures on the VAT side. Doing nothing was hard to take, as the State will have to pay compliance fines in excess of €150 million a year from 2020.

“That takes the biscuit.”

Quirk believes the State is unduly cautious due to the “cash for ash” scandal in the North, and controversy over using unsustainable biomass in power plants. Moreover, he fears “there is a belief that heels are being dragged because they know the price of solar power is dropping all the time; hoping at the back of their minds they will never have to subsidise solar.”

Everything has changed on global warming; everybody is in favour of climate action including solar development. “There is no political risk in it,” says Quirk. Ultimately, there may be subsidy-free solar power, he concedes. “But [in the meantime] stop hiding behind the community ideal and doing nothing.”