The health crisis that comes with climate disruption 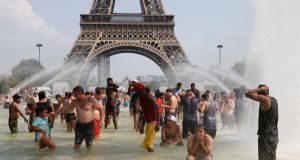 Climate crisis: people cool off by the Eiffel Tower in Paris in July. Photograph: Pascal Rossignol/Reuters

“An environmental crisis is also a health crisis” is the stark message from health professionals keen to draw sharp attention to the health impacts of climate change around the world.

Scientists and doctors might seem to be unlikely activists but more than 1,000 academic and clinical medical doctors in the UK called recently for widespread non-violent civil disobedience in the face of the environmental crisis.

The Global Climate and Health Alliance is another organisation which is seeking stronger links between action on climate and the health sector by planning to reduce harmful greenhouse gas emissions as well as a united response to healthcare emergencies caused by flooding, drought, heatwaves, wildfires, water-borne disease and food shortages.

And the latest report from the European Academies Science Advisory Council (EASAC) is a clarion call to policy makers and health professionals in Europe to act on climate to protect human health.

“The adverse health effects of climate change have been relatively neglected by policy makers until recently, but that is beginning to change – and requires an increasingly robust scientific evidence base to guide the choices between policy options,” says Thierry Courvoisier, EASAC president in the report The Imperative of Climate Action to Protect Human Health.

“The threats must drive decisive action by the scientific and health communities in Europe and by public policy makers to protect the health of future as well as current generations and as a major part of the concerted efforts for reaching targets set in the Sustainable Development Goals for people and the planet,” Courvoisier adds.

He also sees a role for EASAC in providing accurate information on health risk while also countering misinformation on the health effects of climate change.

The EASAC report seeks to inform health policymakers to develop the most effective climate change adaptation (ways of dealing with the consequences of climate change) and mitigation (efforts to reduce greenhouse gas emissions) strategies for health. And to include health impact assessments in developing and monitoring adaptation and migration strategies in energy, transport and housing.

Prof Patrick Goodman from the Technological University of Dublin and the Irish member of the EASAC working group outlined the main points of the report in Dublin. He underlined the need for health service involvements in early warning systems because for example, in a heatwave, most people die at home from existing heart or respiratory conditions.

“These systems will need to be tailored to local situations and need, for example, the opening of public buildings so people can go into them in an extreme weather event.”

Goodman also spoke about the risk of unintended consequences of mitigation measures, citing the promotion of diesel cars with low carbon dioxide emissions in the 2000s which in fact worsened air pollution due to nitrous oxide and particulate matter still present in diesel fumes.

The EASAC report also discusses mistakes made with some insulation materials – used to improve energy efficiency of buildings – but which resulted in moulds developing inside buildings. “There were also examples of newly-sealed buildings which became too warm in the summer and required air conditioning.”

Scientific studies of higher pollen counts in cities with more trees to capture carbon, or the possibility of insect infestations due to global heating, confirm the need for newly-created wetlands as a counter measure.

The EASAC report underlines the benefits of climate change mitigation measures and points to the need for good scientific baseline data and follow-up data to monitor these interventions. For example, a zero-carbon economy with extensive use of clean renewable energy technologies could potentially avert hundreds of thousands of premature deaths annually from air pollutants emitted when fossil fuels are burnt.

In Ireland, the HSE Sustainability Office is charged with advancing the climate change mitigation plans in the health sector. Its spokesman Jim Murphy says his job is “to get the message out there that sustainability has benefits to public health and patients”. The office is in the process of developing a new website to give healthcare staff guidance and support on sustainable initiatives.

Working with the Environmental Protection Agency and the Sustainable Energy Authority of Ireland, the HSE Sustainability Office has developed hospital -based initiatives on water conservation, energy efficiency and waste management.

“Once people see the changes that can be made, they want to be part of it,” says Murphy, who is also on the board of Healthcare Without Harm, an international non-governmental organisation working to reduce the environmental footprint in the health sector.

That climate change contributes to the burden of disease (eg the spread of Lyme disease and West Nile virus to Europe, injury and illness following drought/heatwaves/flooding) and premature mortality due to air pollution is already well documented. World Health Organization figures point to 500,000 premature deaths from outdoor air pollution and 120,000 from household air pollution each year in Europe alone.

Dr Ina Kelly is the Department of Health lead for that department’s Climate Adaptation Plan – which was opened to public consultation in July. She stresses the importance for “health in all policies” so that health impacts are taken into consideration when policies and plans are developed.

She cites the need for better water quality regulation and more information about air quality as air pollution exacerbates respiratory diseases in vulnerable groups. “We will also have to look at aspects of our health service as more cases of vector-borne disease arise. And, how our health system copes with increased deaths during extreme weather events.”

Irish Doctors for the Environment is a group of health professionals with a focus on the impacts of climate change on people’s health. One of its members, Rachel McCann, adds: “As our future becomes more precarious due to climate change, Ireland’s health system needs to implement a range of strategies, policies and measures in order to decrease health vulnerability to climate change. Poor and disenfranchised people will be most affected.”

In the immediate future, intensifying public health and medical programmes to reduce the present burden of disease is the single most important step that can be taken to reduce the health impacts of climate change, she believes.

Why climate-smart food systems must be good for our health

The latest report from the European Academies Science Advisory Council calls for the development of healthy, climate-smart food systems at both national and city levels to improve health, with corresponding modifications of the Common Agricultural Policy.

The Imperative of Climate Action to Protect Human Health report also suggest that by reducing the consumption of animal source food and increasing fruit and vegetable consumption, cardiovascular and other non-communicable diseases will be reduced as will greenhouse gas emissions from livestock production.

The report states there is a need to debate whether environmental or health criteria will be used to influence food system policies in the promotion of dietary guidelines for sustainable healthy diets. These questions will undoubtedly be hotly debated in the run up to the new Common Agricultural Policy in 2021.