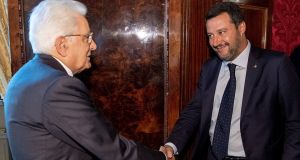 The leader of Italy’s anti-establishment Five Star Movement (M5S) has said he is striving for “a solid majority” with the centre-left Democratic Party (PD) after the collapse of M5S’s stormy alliance with the far-right League.

“We won’t let the ship sink, or Italians will pay,” Luigi Di Maio said after a meeting with president Sergio Mattarella.

Mr Mattarella met leaders of Italy’s main parties throughout Thursday to see if an alternative government can be formed after outgoing prime minister Giuseppe Conte ended the M5S-League coalition, which has been on shaky ground ever since it came to power in June 2018.

The collapse was triggered earlier this month by League leader Matteo Salvini’s call for fresh elections, as he sought to exploit the League’s growing popularity.

Fearing an M5S-PD alliance that would put paid to his election hopes, Mr Salvini appeared to backtrack after his talks with Mr Mattarella on Thursday. He said that while he still wants elections, the League could also resume governing with M5S as long as it got things done.

“There was a stalled government that stalled the country, if they want to restart the government and the country, I am here, without looking back – if there’s a different team that get things done, I won’t hold a grudge,” Mr Salvini said.

He added: “An M5S-PD agreement would mean returning to ‘the old politics’. My interest is that Italians have a government that does things – I’m sure Mattarella has and will have all the elements to choose in the best interests of the people and country.” Mr Salvini said he “discovered” some within M5S backed his “brave” budget proposal.

M5S and the PD are in talks to come up with a programme that could steer the government through until the end of its legislative term in 2023.

The PD leader, Nicola Zingaretti, who, until Wednesday had resisted talk of the potential alliance, has outlined five key conditions for a deal with M5S, including a change in policy on the management of migrants, a commitment to remaining in the EU, more investment, changes to social and economic policy and a focus on sustainable development.

Mr Mattarella said the parties had told him they needed more time to find an accord, and told them to report back on Tuesday of next week. Speaking to reporters on Thursday after two days of talks, Mr Mattarella said dissolving parliament was a decision that should not be taken lightly.

Mr Zingaretti had told reporters after meeting Mr Mattarella on Thursday morning that he was willing to explore a government with M5S but “not at any cost”.

“We need a turning-point government, alternative to the rightist parties, with a new, solid programme, an ample parliamentary base, which will restore hope to Italians,” he added. “If these conditions do not exist, the natural outcome of the crisis is an early election for which the PD is ready.”

The outgoing prime minister, Giuseppe Conte, ended the 14-month alliance between the far-right League and M5S on Tuesday. Mr Salvini had declared the partnership unworkable this month as he manoeuvred to exploit his rising popularity and attempted to bring about snap elections.

Italian media reported on Thursday that Mr Mattarella would probably opt for early elections if M5S and the PD failed to come to an agreement. There were also reports that Mr Salvini could try to continue the coalition with M5S, fearing being pushed into opposition. – Guardian, Reuters