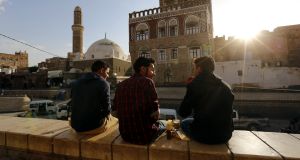 Yemenis sit in front of historic buildings in the old city of Sana’a. Aid delivery to starving Yemenis has improved, but the UN is struggling to secure funds for its programmes. Photograph: Yahya Arhab/EPA

UN envoy Martin Griffiths has warned the UN Security Council that the situation in Yemen has become untenable and the country now risks fragmentation due to warfare in the south.

“Every additional day of the conflict adds to the total of the tragedy and misery. No country can tolerate the stresses of internal conflict indefinitely. Yemen cannot wait,” said Mr Griffiths, a British diplomat who was appointed special envoy to the war-torn country in February last year.

He cited the capture by Emirati-backed southern separatists of the port city of Aden, the seat of the Saudi-sponsored government, and their takeover of state institutions.

He expressed concern over the separatist seizure of neighbouring Abyan province and its military bases and institutions following fierce fighting with government forces.

Mr Griffiths warned that the increased chaos could allow the re-emergence of extremist groups such as al-Qaeda in the Arabian Peninsula and Islamic State.

The Yemeni government says it will not hold talks with the separatists unless they withdraw from Aden, hand over weapons and permit the return of government forces. In a letter to the security council, it accused the Emirates and secessionists of plotting to fragment the country despite Saudi calls for de-escalation in the south and a return to the battle against Houthi rebels in the north.

The spokesman of the secessionist Southern Transitional Council, Jamal Haidara, has adopted a defiant line. He said the council had “plans” for Aden and Abyan and would “continue to Hadramout and other southeastern provinces”.

Secessionist figures have repeatedly stated their aim is to recreate the independent state of South Yemen, which merged with North Yemen in 1990 to form the Yemen Arab Republic.

Addressing the security council this week by video link from Jordan, Mr Griffiths expressed concern that the dire developments in the south could negate the successful ceasefire in the western port city of Hodeidah where, he said, “there have been no major military operations” involving Houthi and pro-government forces.

He also said humanitarian aid was flowing smoothly through Hodeidah and neighbouring ports, which accounted for 80 per cent of Yemeni imports. This was “a major achievement” benefitting Yemeni civilians.

Aid delivery to starving Yemenis may have improved, but the UN is struggling to secure funds for its programmes. UN assistant secretary general for humanitarian affairs Ursula Mueller told the security council that assistance was reaching 12 million Yemeni civilians every month, but only 34 per cent of aid requirements were being met.

This was a tragedy as adequate funding would enable the UN to “save millions of lives and reduce people’s suffering”, she said.

She reported that the powers prosecuting the war in Yemen, Saudi Arabia and the Emirates, had paid only a fraction of their pledges for life-saving aid to Yemen. Riyadh has paid only $127 million (€115m) and Abu Dhabi $16 million of the total of $1.5 billion pledged toward the UN’s $2.6 billion appeal, while other donors had honoured their commitments.

Ms Mueller said essential programmes were closing down and last month vaccination campaigns, supplies for health facilities and cholera programmes had been cut.