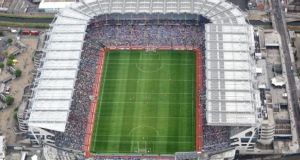 The Irish Muslim & Peace Integration Council is seeking a similar dispensation to the one following a request from Archbishop of Dublin Diarmuid Martin. Photograph: Norman McCloskey/Inpho

The Irish Muslim & Peace Integration Council (Impic) has pleaded with Taoiseach Micheál Martin to allow Eid celebrations involving 500 people go ahead at Croke Park in two weeks despite an extension to limits on outdoor gatherings.

Eid is one of the major annual celebrations in Islam. The event had been planned for Croke Park before the Government decided on Wednesday to extend those restrictions limiting outdoor gatherings to 200 people until August 10th.

The Government’s original roadmap said that limit would be raised on Monday.

In a letter to the Taoiseach, Shaykh Umar al-Qadri said he was requesting an exemption for the Eid event “similar to the precedent set by outgoing taoiseach Leo Varadkar following a plea made by Archbishop Diarmuid Martin”.

Chair of the Impic, Shaykh Al-Qadri said that following the Catholic Archbishop of Dublin’s plea, exception was “granted to churches and mosques to increase the number [attending at public worship] from 50 to 100 with the justification that many churches were able to accommodate larger gatherings while maintaining social distancing requirements”.

He continued that “Eid at Croke Park can certainly accommodate 500 people while maintaining social distancing”.

He said he hoped the Taoiseach would allow “dispensation for the special occasion of Eid so we can mark the festival with a display of diversity and inclusivity in Ireland”.

Shayk al-Qadri said that within two hours of the Eid event at Croke Park being announced last Monday, all 500 places had been booked.

The event is to take place on July 31st or August 1st, as determined by the Muslim calender based on an official sighting of the new moon. The date will be confirmed on July 21st.

Among invited guests are Taoiseach Micheál Martin, Tánaiste Leo Varadkar, both Archbishops of Dublin Diarmuid Martin and Michael Jackson, as well as other faith leaders including Rabbi Zalman Lent.

It is planned the Eid event will take place on the pitch at Croke Park. Shaykh al-Qadri said all participants would be wearing masks and would bring along their own prayer mats.

“We have been doing everything we can to ensure people’s safety,” he said, pointing out that his mosque and those associated with it in the council “were among the first in Ireland to close, on March 10th last”, due to concerns at the spread of coronavirus.