Increasing proportion of these contacts are not coming forward for testing, briefing is told 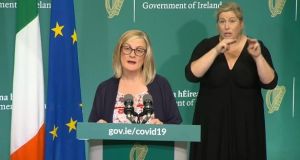 Liz Canavan, assistant secretary general at the Department of the Taoiseach: ‘If you are asked to get a test, please do so’

The Government has urged people who are identified as close contacts to positive coronavirus cases to get tested for the condition, following reports some people are not coming forward.

Speaking at Government buildings on Thursday, Liz Canavan, assistant secretary general at the Department of the Taoiseach, said the proportion of people who are refusing to be tested is increasing.

“Public health doctors are reporting an increase in the number of clusters around the country in recent days but they’re also reporting an increasing proportion of people identified as close contacts of positive cases who, when offerred a test, are not coming forward to be tested,” Ms Canavan said.

“Testing is the foundation stone of everything we are doing in relation to this disease. If we don’t know how many people have it, if we don’t know where the disease is, we can’t stop it [from] spreading. Please, if you are asked to get a test, please do so.”

Ms Canavan was speaking following the Government decision on Thursday to push back phase four of the roadmap for reopening society until August 10th due to a rise in the number of Covid-19 cases in the community.

The decision means, among other things, that pubs, bars and nightclubs will not be allowed to reopen as planned on July 20th. Currently, pubs are only allowed to operate if they are also providing a “substantial meal” – of at least €9 – to customers.

Ms Canavan said that between July 3rd and July 12th, gardaí identified 37 individual cases where there were “potential breaches of the health regulations . . . even after providing the premises with an opportunity to rectify the situation”.

Ms Canavan said she understands “how disappointing” the decision to pause phase four is for business owners, employees and the public but added it is better to “pause now and avoid risking any reversal”.

She explained why the Government made the distinction between food-serving premises and pubs, adding “we all know the difference between our behaviour and our expectations when we go into a restaurant as opposed to a pub”.

Ms Canavan said that “to support the sector and, acknowledging the very strong food business for many publicans”, the Government permitted pubs acting as restaurants to reopen.

“The National Public Health and Emergency Team have doubled down on their ask of pubs that are open to behave as restaurants, and the guidance on what that means is clear,” she said.

Despite the pausing of phase four, and the addition of other measures – such as mandatory wearing of face covering in shops and indoor spaces – Ms Canavan said “we are still in a very good place with the disease”.

“The trend in infections has crept up, in a small way and slowly, but that small increase is persisting. The problem is the nature of this disease. It’s highly infectious, it spreads fast.”

Earlier on Thursday, Minister for Health Stephen Donnelly said pubs reopenimg now could “materially add to the possibility of a second wave” of the coronavirus.

The Government would be prioritising the reopening of schools and healthcare facilities, the minister told Morning Ireland.

Proposals to permit larger gatherings of 100 people indoors, up from 50, and 500 people outdoors, up from 200, will also not proceed as earlier planned.

Mr Donnelly also emphasised the need to get the R number down to below one. At present it is between 1.2 and 1.8, if that rate were to continue within three weeks the rate would be up to 150 cases per day, he warned.