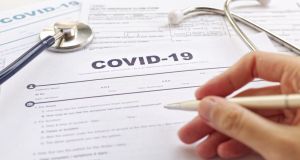 People who have Covid-19 may see any decision on their life assurance policies and cover deferred until they make a full recovery. Photograph: iStock

Life assurance companies are now including a section on new application forms dedicated to Covid-19 but according to the industry people who have contracted and then recovered from the disease are “unlikely” to see any impact on their policies as a result.

However, people with the illness may see any decision on their policies and cover deferred until they make a full recovery.

Virtually all life assurance policies routinely include detailed questions about an applicant’s health including specific queries focusing on family medical history, blood pressure, cholesterol, stress and HIV and Aids among other conditions.

Covid-19 has now joined the list and people who apply for life assurance and serious illness cover are being asked if they have tested positive for Covid-19 or if, in the last 30 days, they have developed a new or continuous cough, have had a raised temperature, been advised to self-isolate or been in direct contact with an individual suspected or confirmed as having the illness.

According to industry sources, the nature of the illness and its long-term impact on people is not yet known and remains a concern.

However, as it stands, people are not likely to be penalised in the form of higher premiums or denied cover if they have contracted the illness.

A failure to disclose the illness when applying for a life assurance policy could, however have serious consequences for people and could see claims denied at a future point.

“When taking out an insurance policy the existence of a medical condition such as Covid-19, would be taken into consideration,” a spokeswoman for Insurance Ireland, the umbrella group for the sector said adding that it was “unlikely that once the applicant has fully recovered from the illness that it would have any impact on the policy they are seeking to incept”.

However, she said applicants who were displaying symptoms or undergoing testing or had a positive Covid-19 diagnosis, would most likely see a decision on their policy deferred for a short period.

“Once the individual recovers and is back in good/standard health, then the policy terms will be offered (usually standard unless there were complications).”

She stressed that it was “important at all times that customers answer questions accurately and truthfully, a failure to do so could have an impact on any subsequent claim under the policy.”