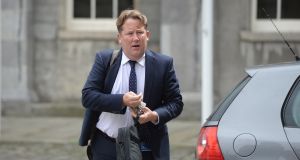 Minister for Housing Darragh O’Brien: examining raising the threshold for the mortgage-to-rent scheme by as much as 30%. Photograph: Dara Mac Dónaill

The Government is examining plans to widen access to a key State scheme to keep those in negative equity in their homes.

Minister for Housing Darragh O’Brien told The Irish Times he was looking at plans to raise limits on the value of a home which can participate in the mortgage-to-rent scheme. The scheme involves those with unsustainable mortgage debt surrendering their home but remaining in the property and becoming social housing tenants.

“The objective of mortgage-to-rent is a good one,” he said. “A family in dire straits in relation to mortgage arrears, when it is kind of irreversible in the sense they won’t be able to catch up, it’s a scheme that in principle is a good one because it allows a family to stay in their home.”

However, he said uptake of the scheme had been lower than he would like, partially due to the limits on the value of a home being at a level that made many homeowners, particularly those living in cities, ineligible. He also said the scheme was cumbersome and time-consuming.

“The issue has been in our major cities and greater urban areas, that those who tend to be in systemic mortgage arrears, where the situation is irreversible, tend to be those who purchased at the top of the last boom.” Currently, a house in Dublin, Meath, Kildare, Wicklow, Louth, Cork and Galway is not eligible if it is valued at more than €395,000. A limit of €310,000 applies for an apartment or townhouse in these counties.

Under the scheme, the owner relinquishes the home, which is either taken over by a local authority or an approved housing body. The former owner then becomes a social housing tenant and remains in the property. Certain income limits must be satisfied and, in almost all circumstances, the property must be in negative equity.

A version of the mortgage-to-rent scheme has been used by debtor rights advocate David Hall’s iCare housing group in recent years, using finance from AIB to purchase some of the bank’s non-performing loan stock. In this version, the mortgage debt is written off.

A commitment to expand and reform the scheme was included in the programme for government. Raising the threshold for eligibility would need approval from the Department of Finance, Mr O’Brien said. If that was forthcoming, he would also look at ways to streamline the programme.