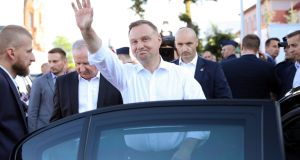 More than 77 per cent of Poles living in Ireland who participated in Poland’s presidential election voted against the winner of Sunday’s vote Andrzej Duda, according to data from the Polish Embassy in Dublin.

The embassy figures show 18,503 Poles living in Ireland – 77.07 per cent of those who submitted a postal vote – supported liberal Warsaw mayor Rafal Trzaskowski. 5,504 people, or 22.9 per cent, voted for Mr Duda, the conservative incumbent who is allied with the ruling nationalist Law and Justice (PiS) party. Final tallies show Mr Duda has won five more years in power with 51.03 per cent of the vote.

Barnaba Dorda, chair of Forum Polonia, said there had been a spike in registrations among Poles in Ireland accompanied by a “huge shift” in their voting patterns. In 2015, 54 per cent of Poles in Ireland voted for Mr Duda while this year the majority supported the liberal opposition candidate, he said.

Data from across the world showed that most Poles living abroad voted for Mr Trzaskowski, said Mr Dorda. He added that Irish politicians should pay attention to these voting patterns and try and appeal to Poles in Ireland who are becoming more politically active.

Krzysiek Wisniewski, who moved back to Poland last December after living in Ireland for 13 years, voted for Mr Duda because of the improvement in living standards he’s witnessed in his home country. “The current government supported Duda and they’ve brought huge positive change to Poland in terms of people’s income,” he told The Irish Times.

Mr Wisniewski, who now works for Poland’s national radio station, says the media’s portrayal of Mr Duda as anti-Europe was misleading and that the president actually supports Poland’s EU membership.

“There were even claims that if he won he would push Poland out of the EU but there’s no Polexit coming.”

Mr Wisniewski believes the strong support for the opposition candidate among Poles in Ireland is probably due to the age demographic of people living here.

“Younger Poles voted for Trzaskowski, we saw that in Poland as well. He presented himself as very pro-change and younger people want to see that change.”

Teresa Buckowska, who has lived in Ireland since 2005, described the election results as “heartbreaking” and said Mr Trzaskowski had represented “a light at the end of this dark tunnel Poland is going through”.

Poland’s politics have created a divide in Ms Buckowska’s family with one half “grieving for Polish democracy”. “Friendships have been broken and family ties loosened because of this,” she said.

Citing research by international observers from the Organisation for Security and Co-operation in Europe (OSCE), Ms Buckowska said the incumbent had mis-used public funding to run a campaign marked by “homophobic, xenophobic and anti-Semitic rhetoric”.

However, she was heartened by the rise in voter registrations among Poles in Ireland.

“It showed the situation in Poland is so bad that people cannot afford to be bystanders. Living in a country that is so much more advanced when it comes to human rights and equality... having that perspective from outside made people think about what was happening in Poland.”

Patrycja Jurkowska, who has also lived in Ireland since 2005, admitted she had become disengaged from Polish politics since the PiS gained power five years ago and as a result did not register to vote in the election. However, in light of the results, she said she regretted that decision.

“I’m very disappointed with myself, I definitely regret hugely that I didn’t register to vote. Neither of the candidates were perfect in my opinion but I definitely would have voted for Trzaskowski because he supports Europe and is more open-minded.

“The results are worrying, the picture the (PiS) party is painting of the EU is not encouraging. They’re very closed minded when it comes to other religions and have said worrying things about the LGBT community. I think we Poles abroad have a huge role to play to show people in Poland what it means to be European and to give them a broader perspective.”