Measure applies to mothers and fathers of children born after November 1st, 2019 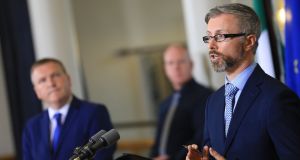 Parents of children born during the pandemic crisis will get an extra three weeks of parent’s leave to offset the impact of having a child during the harshest lockdown measures, under Government proposals approved by the Cabinet on Monday.

The move was announced by Minister for Children Roderic O’Gorman on Monday evening at a post-Cabinet briefing in response to a Sinn Féin private members’ Bill on maternity leave.

The memo supporting the policy was brought to cabinet by Minister for Justice Helen McEntee, with supporting work coming from the Minister for Social Protection, Heather Humphreys.

“This is a measure to recognise to some extent the particular challenges that mothers and parents have faced during the Covid-19 crisis,” he said. “We are acknowledging that maternity leave was a difficult period for parents and others in the context of the Covid crisis, and the supports that were traditionally available, both official and then ability to engage with grandparents and friends, just wasn’t doable during that time.”

The Government decision is that the proposals will be considered part of the Budget 2021 process, coming into force thereafter. The extension from two weeks to five will apply to all new parents once the reforms are approved, meaning an extra six weeks per family for two-parent families. The parents of children born in the pandemic will be eligible to take the leave at the same time as all other parents, once the budget 2021 process is completed in November.

The National Women’s Council of Ireland (NWCI) said the measure fell far short of needs of mothers who were on maternity leave during lockdown.

Orla O’Connor, director of NWCI said it was a welcome measure but had been expected to be announced in the budget and was in the Programme for Government . She said it does not come in until November so does not retain links between women and the workplace. She said many women lost out on support of family during maternity leave and babies missed key appointments. “This is why extending maternity benefit was so critical for new mothers, and this measure does not go far enough to meet the needs that new mothers have raised with NWCI since the start of the Covid crisis.”

Minister for Public Expenditure Michael McGrath also said Ministers had discussed a range of supports for businesses to be included in the July jobs package of stimulus measures, which he said would be announced next week.

These included the extension of the credit guarantee scheme, as well as working capital grants for businesses. He said an extension of the decision to suspend local authority rates was also likely, but that no decision had been made on how long, or how big the overall package of supports would be.

He said there was a “recognition that it needs to be of scale, ambitious and a genuine effort to match the scale of the challenges that businesses right across the country are facing”. He said the Government was also examining changes to the Pandemic Unemployment Payment, and agreed there should be no “cliff-edge end” to the scheme, which is supporting hundreds of thousands of workers who lost their jobs as the pandemic hit.

Mr McGrath said the Government was also looking at whether it would be possible to “accelerate the commencement of shovel-ready projects that are labour intensive and can get people back to work quickly”.

Minister for Foreign Affairs Simon Coveney said there had been “very, very little progress and quite a lot of frustration” in talks between the European Union and the UK over their future relationship .

“We hope the UK will adapt its approach to the commitment that they made in the political declaration which they have moved away from as these negotiations began, so we can try to put the pieces of this agreement in place.” He said it was imperative to avoid the consequences of a “no-trade-deal Brexit” which he said would be “an enormous act of self-harm but also an extraordinary failure of politics, in my view, if we were at the start of next year to be trading on the basis of WTO rules and regulations”.